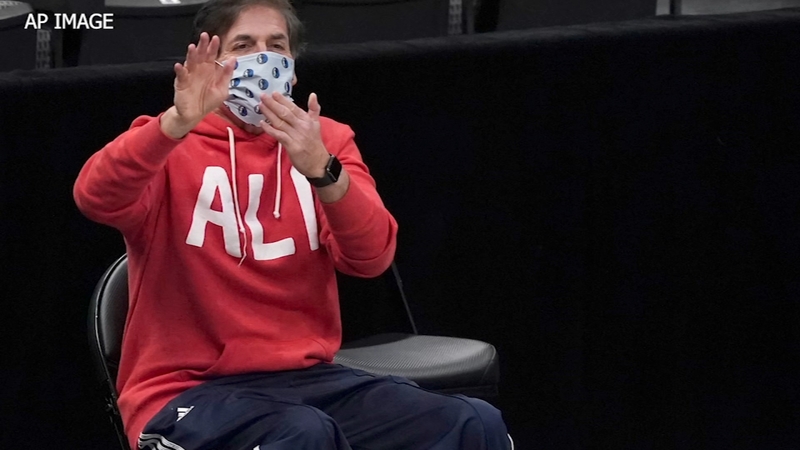 The Dallas Mavericks are under attack by some GOP Texas lawmakers seizing on a report that team owner Mark Cuban decided to stop playing the national anthem before home games this season.

Texas Lt. Gov. Dan Patrick on Wednesday called Cuban's decision "a slap in the face to every American" and "an embarrassment to Texas."

"Sell the franchise & some Texas Patriots will buy it," Patrick said in a tweet. "We ARE the land of free & the home of the brave." Patrick did not immediately respond to requests for comment.

The backlash comes after 13 preseason and regular-season games have already been played at the American Airlines Center without the "Star-Spangled Banner," according to The Athletic. Those games took place without fans in the stands, with the exception of Monday's game, when The Athletic noticed the change and raised the question.

Cuban told the sports website it was his decision to remove the anthem. He has previously expressed support for athletes kneeling during the anthem before games to protest racial injustice. The Washington Post reported that Cuban said it's unclear whether they will play the song moving forward.

But on Wednesday, the professional basketball league released a statement saying "[w]ith NBA teams now in the process of welcoming fans back into their arenas, all teams will play the national anthem in keeping with longstanding league policy."

Already some Republican state lawmakers are calling for legislative action and signaling they intend to take aim at tax breaks for stadiums.

"It's time that Cuban's special Texas tax breaks comes to an end," tweeted state Sen. Drew Springer, R-Muenster, who hinted that a bill could be filed imminently.

In a statement on Twitter, Cuban said the team respects "the passion people have for the anthem and our country" but they "also loudly hear the voices of those who feel that the anthem does not represent them."

"We feel that their voices need to be respected and heard, because they have not been," Cuban said Wednesday. "Going forward, our hope is that people will take the same passion they have for this issue and apply the same amount of energy to listen to those who feel differently from them."

The Mavericks are "believed to be the first professional North American sports team to cease playing the anthem before games with fans in recent years," The Athletic reported.

"The stadiums, subsidized by the taxpayers, which host the Mavericks should either condemn [Cuban's] anti-American decisions and override him; or, return all tax subsidies they have received," state Rep. Dustin Burrows, R-Lubbock, said in a tweet Wednesday. Burrows and Springer did not immediately reply to requests for comment.

"It's sad when you see rich, spoiled athletes that don't recognize what an incredible blessing this country is," Cruz said in 2016.

Former President Donald Trump in 2017 threatened to end federal tax subsidies for stadiums after professional football athletes kneeled during the anthem. The American Airlines Center "opened in 2001 with $152 million in financing involving bonds exempt from federal tax," according to The Dallas Morning News.

The video above is from a previous story.
Report a correction or typo
Related topics:
politicstexastexas newsnationalpoliticstexas tribunedallas mavericks
TOP STORIES
Teen killed, 2 men shot at NW Houston convenience store
6 shot, including a child, within 45-minute span overnight
Scattered storms will fire up as a cold front stalls over Houston
Stray bullet hits 6-year-old watching TV in N Harris Co.
TxDOT seeing 'a lot more aggressive driving' out on Houston roads
Woman shot in the face while answering her front door, HPD says
Houstonians changing daily habits because of spiking crime
Show More
Street light taken down at the West Beltway after deadly crash
Abbott vetoes bill that would protect dogs from animal cruelty
A recap of the news for Tuesday, June 22
Former Sheldon ISD teacher accused of having sex with student
Here's what may be causing increase in Americans late snacking
More TOP STORIES News