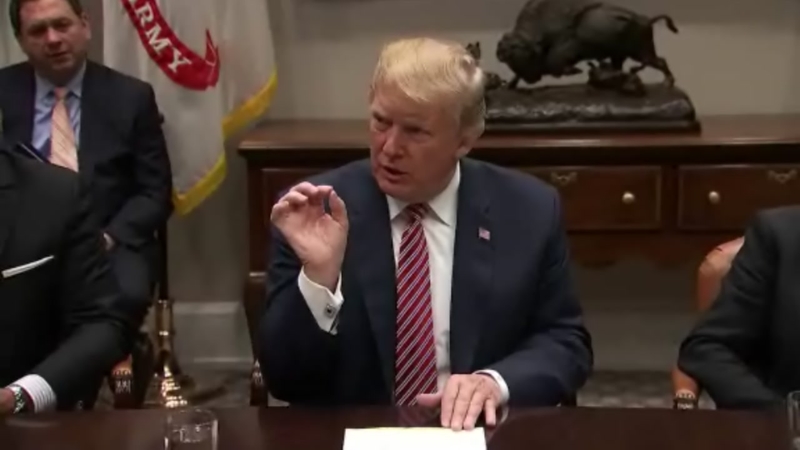 WASHINGTON, D.C. (KTRK) -- A day after backing an idea to arm teachers, President Trump is digging deeper into the proposal, bringing up a pay bonus for teachers who take weapons classes.

On Thursday, the president clarified his stance on arming grade school instructors, saying "certain highly adept people" and those who "understand weaponry, guns" should be the ones armed.

"But if they have the aptitude, I think a concealed permit for having teachers, and letting people know that there are people in the building with guns, you won't have - in my opinion - you won't have these shootings because these people are cowards," Trump said with his advisers and cabinet present.

"They're not going to walk into a school if 20 percent of teachers have guns," Trump continued.

To go along with the idea, Trump blamed the generally "gun-free zones" of campuses as something that appeals to shooters. He did, though, agree with raising the minimum age to purchase semi-automatic rifles from 18 to 21 years old.

The president of the 1.7 million-member American Federation of Teachers, Randi Weingarten, called arming teachers a horrible idea and said an educator's handgun would be no match for the assault-style weapons often wielded by attackers.

"The solution is to ban these military weapons from people who shouldn't have them," Weingarten said.

"Anyone who hasn't received the extensive training provided to law enforcement officers will likely be mentally unprepared to take a life, especially the life of a student assailant," it said in a statement Thursday.

Wayne LaPierre, vice president and CEO of the National Rifle Association, said Thursday that reactions like Weingarten's are expected after mass shootings.

"The whole idea from some of our opponents that armed security makes us less safe is completely ridiculous," he told a conference of conservatives in Washington.

Calling schools "virtually wide-open soft targets," LaPierre added, "It should not be easier for a mad man to shoot up a school than a bank or a jewelry store."