Abbott has lifted almost all Texas pandemic restrictions. But not the one limiting jail releases. 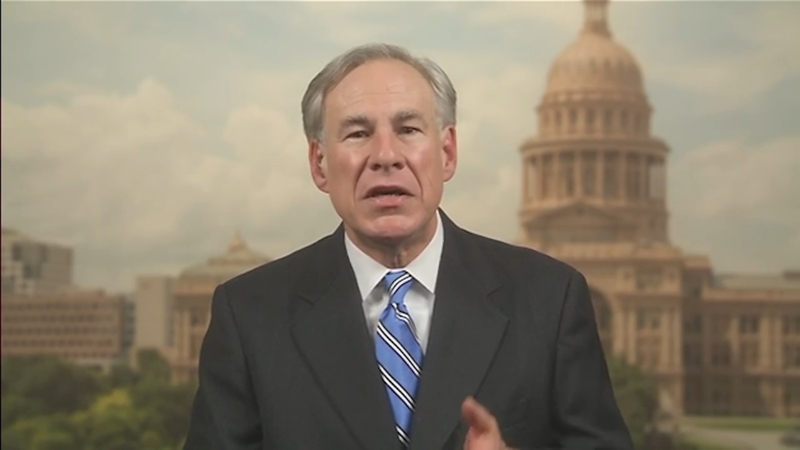 Texas Gov. has lifted almost all pandemic restrictions, but not this one

AUSTIN, Texas (KTRK) -- Gov. Greg Abbott has been saying for months that Texas is no longer restricted by the coronavirus pandemic. Face mask mandates are gone, and people are crowding back into businesses and public places.

"Texas is open 100% without any restrictions or limitations or requirements," he said on Twitter Monday.

But there is one crucial government function the Republican governor has kept limited since he declared a public health disaster last March: the release of people from Texas county jails.

Abbott's controversial order aims to stop the release of any criminal defendant accused or previously convicted of a violent crime on a no-cost bond, meaning such defendants would only get out of jail in the pandemic if they could afford money bail. It also disallowed those serving short, misdemeanor sentences from being released early for good behavior, a common practice in county jails. The order's legality has long been questioned, and at least several local courts have found it unconstitutional - leading to a patchwork implementation.

Still, at least in parts of the state, the order continues to keep people in jail who may have otherwise been released before the coronavirus ravaged Texas. It is the governor's only emergency order aside from requiring collection of medical data on the coronavirus that he has kept in place for more than a year.

Abbott issued his emergency order last March as Texas counties sought to combat the pandemic by lowering their jail populations - where the risk of the coronavirus was particularly high given poor sanitary conditions and close quarters. At the time, Abbott said the order was to prevent mass releases from jails.

"Releasing dangerous criminals makes the state even less safe ... and slows our ability to respond to the disaster caused by COVID-19," he said last March.

A spokesperson did not answer repeated questions in the last month asking why the governor has continued the order.

Some bail reform advocates and opponents of the order argue it's a political play. Even before his order suspended a large swath of Texas bail law during the pandemic, the governor for years has asked lawmakers to change state bail practices to keep more criminal suspects deemed dangerous behind bars before their trial. This year, he made it an emergency for the Texas Legislature to pass such a law. When they failed to do so last month, he vowed to bring lawmakers back soon for a special session, in part to again work on bail legislation.

"It always seemed more political than directly related to the disaster response," Brian Klosterboer, an attorney with the American Civil Liberties Union of Texas, said of the order. "But particularly now, when every other emergency order has ended apart from the data collection, I think it highlights even more that it is a political position that is not tied to responding to the disaster and to an emergency."

An uneven system
At the start of the pandemic, some judges across Texas began releasing hundreds of inmates on reduced cash bonds or personal bonds - which don't require money - because of COVID-19. Release on personal bonds often still requires conditions like regular check-ins and drug testing.

But some jail releases prompted concern, including the low-cost release of a murder suspect in Harris County. Abbott stepped in shortly afterward with his order. Similar to most of the country, Texas jails have since largely returned to pre-pandemic population levels.

Abbott's restrictions for personal bonds apply to arrestees who have been accused or ever previously convicted of a crime that "involves physical violence or the threat of physical violence." Prohibitions of early jail release for good behavior or release on a GPS ankle monitor applies to those currently serving or ever convicted of such a crime.

That included Preston Chaney, who was one of dozens who died from COVID-19 in Texas county jails. The 64-year-old man was accused of stealing lawn equipment and meat out of someone's garage and kept in the Harris County jail for months because he'd been unable to pay $100 for bail. A court document stated he was denied cashless release because of Abbott's order. He'd previously been convicted of low-level assault.

The order's limitation on personal bonds, but not money bail, has continuously spurred legal fights from bail reform advocates and judges, who have argued it discriminates against poor people and goes beyond the governor's power. In recent years, federal courts have found bail practices in Harris and Dallas counties unconstitutional for discriminating against poor defendants.

"No person should be kept in jail simply because they're too poor to afford bail, and that's what &#91Abbott's order] does," Klosterboer said. "People can still pay their way out of the system."

In legal battles, lawyers for Abbott and Texas Attorney General Ken Paxton argued that the order is constitutional because it allows no-cost release to still be considered for health or safety reasons after a chance for a hearing is given, though some attorneys said that sometimes took weeks.

"The executive order reasonably safeguards the public by taking actions - as permitted by the Texas Disaster Act - to ensure that violent people are not released en masse without a judge first making an individualized assessment," wrote former Solicitor General Kyle Hawkins in a court filing last April.

Still, at least several courts and jails began to disregard Abbott's order during the last year after local judges found it unconstitutional and an overreach of gubernatorial power. After such a ruling in Harris County last year, the sheriff's department quickly restarted its good-conduct release program, where inmates can end up serving only a third of their jail sentence. Only misdemeanor defendants are sentenced to county jail instead of the state prison system in Texas, with a maximum jail sentence of one year.

"Under the Texas Constitution, only the Legislature may suspend the laws, and that power is non-delegable," state district Judge Chris Morton said in an order last May.

Following two similar judicial rulings in Travis County and questions from The Texas Tribune, a spokesperson for the Travis County Sheriff's Office said Tuesday the department resumed crediting good-conduct time to inmates last week. The Dallas County Sheriff's Office said this week it did not change its good-conduct practices because of Abbott's order.

But a lack of direct action from statewide courts has resulted in a nonuniform system, where the order's influence on jail decisions varies not only from county to county, but courtroom to courtroom.

In the civil courts, the Texas Supreme Court ruled in favor of Abbott's order in April, but it didn't weigh in on the questions of constitutionality or gubernatorial overreach. Instead, the all-Republican court said the county judges who brought the lawsuit were the wrong ones to challenge the order, though the justices did indicate judges couldn't easily be prosecuted for overriding the order on their judicial discretion.

On the criminal side, the Court of Criminal Appeals has so far avoided a ruling on the order, according to several defense attorneys and bail reform advocates, though some cases have made it to its doorstep.

"If a judge wants to get around this stuff they can do it in most instances," said Grant Scheiner, president of the Texas Criminal Defense Lawyers Association. "What I'm concerned about is there may be some judges in far flung areas across the state who are unaware of the constitutional issues or perhaps not moved by them."

Harris County misdemeanor judges, who are all Democrats, have long ignored the order, instead following the local rule to release most low-level defendants on personal bonds that was cemented as part of their federal court settlement to change unconstitutional bail practices. Scheiner says many judges in large counties have also knocked down or sidestepped the order.

But in Nueces County, state district Judge Inna Klein said she abides by the order because she believes in the governor's power to issue it, though she struggles with wanting to keep judges independent from the executive branch. She said her local colleagues follow the order as well. The Nueces County Jail was 98% full last weekend, she said.