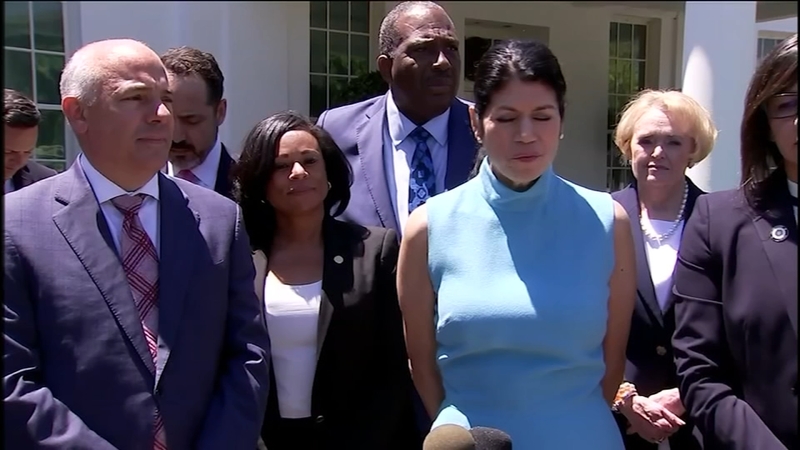 WASHINGTON (KTRK) -- The Democratic lawmakers who walked out on a Texas House vote that would have put voting reforms into place are meeting with Vice President Kamala Harris on Wednesday.

The group was invited to Washington on the heels of a dramatic stand against passage of a Texas voting bill that Democrats believe would have been restrictive and discriminatory to communities of color and those with disabilities.

While the move to hold up Senate Bill 7 from reaching Gov. Abbott's desk was temporary, Washington Democrats are using the Texas delegation's presence to fire up the party as it tries to push forth a national voting rights bill.

Democrats in Washington are hoping the visit by the state lawmakers also fire up passage of a national voting bill despite tall hurdles.

Even with the Texas Democrats present, Senate Democrats and their proposed national voting bill face strong opposition by their Republican counterparts in the evenly split chamber, as well as a holdout within their party by West Virginia U.S. Sen. Joe Manchin.


The Democrats' bill would bring about the largest overhaul of U.S. voting in a generation, touching nearly every aspect of the electoral process. It would remove hurdles to voting erected in the name of election security, like voter ID laws, while curtailing the influence of big money in politics. It would create a nonpartisan process for redrawing congressional districts, while expanding mail voting and early voting, while restoring the rights of felons to cast a ballot, among scores of other provisions.

At the heart of the GOP's opposition is the possibility of "federalizing" all elections, as Senate Minority Leader Mitch McConnell claimed.

Gov. Abbott responds to Dems walkout: 'No pay for those who abandon their responsibilities'
EMBED More News Videos

After a Democratic walkout in the state House of Representatives, Abbott said there will be "no pay for those who abandon their responsibilities."