KTRK
As President Donald Trump was impeached Wednesday for a second time, a U.S. Representative from Georgia is looking to impeach his successor.

The Republican congresswoman said that she'll move forward with the matter one day after Inauguration Day and on Biden's first full day in office.

She wrote in a tweet, "On January 21st, I'm filing Articles of Impeachment on President-elect @JoeBiden."

Greene added, "I'm proud to be the voice of Republican voters who have been ignored."

The congresswoman wrote she will be filing articles of impeachment for alleged abuse of power.

75 million Americans are fed up with inaction.

It’s time to take a stand.

I’m proud to be the voice of Republican voters who have been ignored. #ImpeachBiden#QuidProJoe #BidenCrimeFamily pic.twitter.com/E83s1iOoVF

Greene made the announcement on the far-right, conservative cable news channel Newsmax.

Greene spoke Wednesday during heated exchanges over Trump's impending impeachment in the House. She slammed Democrats for their second impeachment.

"Democrats' impeachment of President Trump today has now set the standard that they should be removed for their support of violence against the American people," she said.

You can hear her full remarks in the video above, along with those of other lawmakers.

Greene won her house seat in November and represents Georgia's 14th Congressional District, which includes almost all of the northwestern part of the state.

But she has also been known for espousing bigoted and conspiratorial views, including those promoted by fringe conspiracy group QAnon.
The QAnon conspiracy theory is centered on the baseless belief that Trump is waging a secret campaign against enemies in the "deep state" and a child sex trafficking ring run by satanic pedophiles and cannibals.

In a series of videos unearthed just after Greene placed first in the initial June 9 Republican primary, she complains of an "Islamic invasion" into government offices, claims Black and Hispanic men are held back by "gangs and dealing drugs," and pushes an anti-Semitic conspiracy theory that billionaire philanthropist George Soros, who is Jewish, collaborated with the Nazis.

The president came in support of Greene prior to her securing her seat in Congress.

Derick Waller reports on the impeachment from Trump Tower in Manhattan.

Fact check: No, impeachment itself would not ban Trump from a 2024 presidential run
EMBED More News Videos

Elizabeth Schulze reports on the situation in Washington, DC. 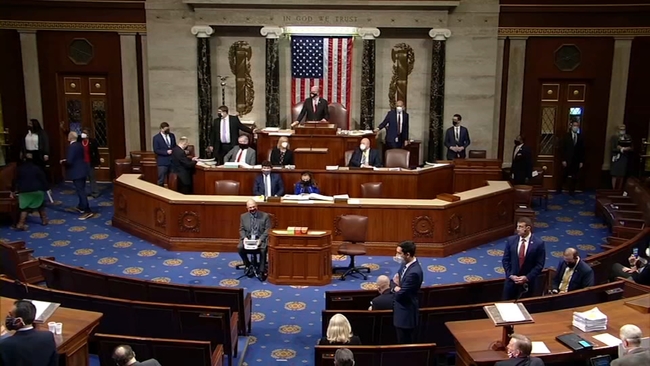