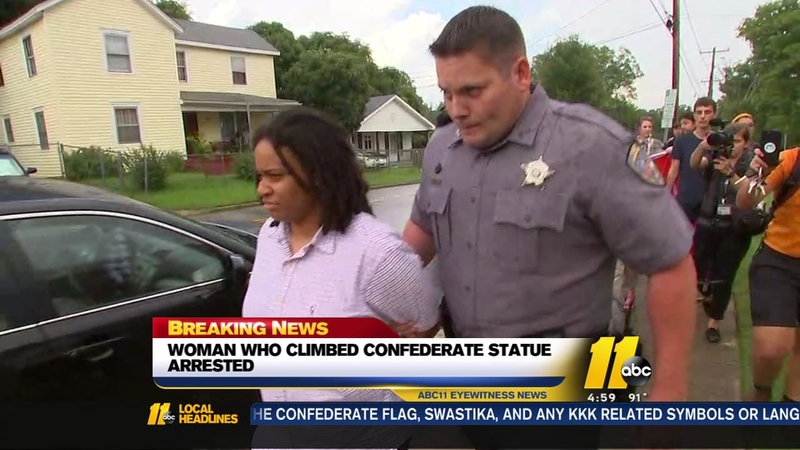 
Takiyah Thompson, 22, was taken into custody shortly after protesters held a news conference Tuesday afternoon at North Carolina Central University. Thompson climbed a ladder to the top of the statue to tie a rope around its neck before the crowd tore it down

Thompson is charged with:

The protesters who took part in toppling Confederate statue in Durham on Monday held the news conference Tuesday to call for the dropping of any charges related to the incident.

Thompson was given a $10,000 unsecured bond. Deputies said Tuesday night that investigators continue to search for other suspects in the removal of the statue.

"The people decided to take matters into our own hands and remove the statue," said Thompson, a member of the far-left Workers World Party and a student at N.C. Central University. "We are tired of waiting on politicians who could have voted to remove the white supremacist statues years ago, but they failed to act. So we acted."

The protesters called for the Durham County Commissioners, the Durham Sheriff's office and District Attorney's office to drop the charges on all protesters involved with the Durham incident and also called on the City of Charlottesville to drop charges against anti-racist protesters from August 12.

Durham County officials called for a "respectful and productive" dialogue on race issues Tuesday following the destruction of a Confederate monument outside the old courthouse in downtown Durham.

"I'm unlikely to support any city or county regulations that restrict the rights of free speech and free assembly for demonstrators," Johnson said.

As the state has a law mandating the protection of Confederate monuments, Davis said county officials will be consulting with state officials about what to do with the heavily damaged monument.

The statue was pulled down by a group of demonstrators Monday evening. A woman climbed a ladder and put a nylon rope around it while others pulled.

Thompson, in an interview with ABC11 on Tuesday, admitted her involvement.

"I feel like it's important to tear down these vestiges of white supremacy," Thompson.

Woman explains why she helped pull down the statue

Congressman GK Butterfield said though he didn't condone the actions of the protesters, but understood their motives.

"I don't condone the destruction of government property, but I understand the hurt and pain the continued existence of Confederate monuments cause to many in our communities, whether it is on the grounds of the US Capitol, state capitals, or any other locations," Butterfield said.

Also at Tuesday's news conference, Andrews addressed criticism that his officers did not intervene as the statue was pulled down. He said using pepper spray was considered, but leaders decided on restraint to avoid injuries and further chaos.

"Don't mistake restraint for inaction. If I had my deputies to engage a hostile crowd, there would have been injuries," he said.

He also said people seen in the video will be arrested.

"Last night we witnessed a blatant violation of the law. No one is getting away with damaging the Confederate statue. We will pursue felony charges," he said.

The monument of a Confederate soldier holding a rifle was erected in 1924 and inscribed on it are the words "in memory of the boys who wore the gray."

Raw video as protesters pull down the statue in Durham.

The statue is one of dozens across North Carolina and one of about 1,500 public displays across the country dedicated to the Confederacy.