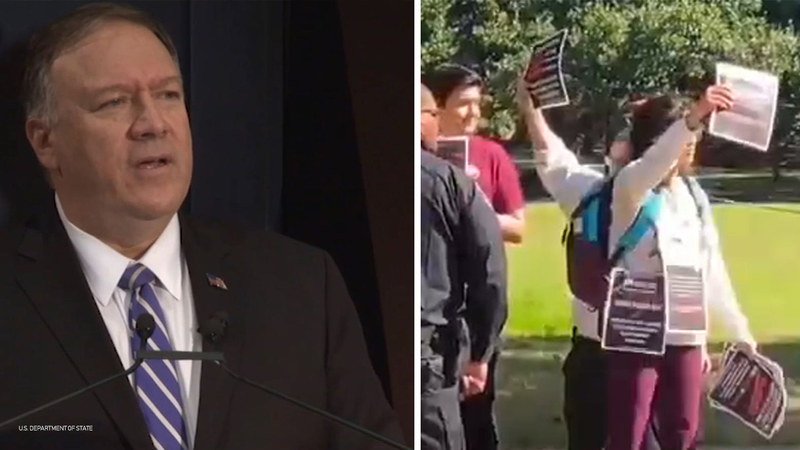 HOUSTON, Texas (KTRK) -- In the midst of the impeachment hearings in Washington D.C., Secretary of State Mike Pompeo spoke at Rice University, where he made jokes about quid pro quo, but avoided questions about alleged wrongdoing by the Trump administration.

Pompeo's remarks came Friday morning at the Baker Institute for Public Policy. He was introduced by former Secretary of State James Baker and joked about his agreeing to appear at the event.

"(Baker) said, 'Here's the deal. You've got to come to the Baker Institute.' And I'm now upholding my end of the quid pro quo," Pompeo said, sparking muted laughter from the audience. "You've got to have fun along the way."

In response to a question, Pompeo said the Trump administration would not rule out use of military intervention against China for that country's handling of Hong Kong anti-government protesters.

"I will never foreclose any possibility for how President Trump may think about how we should appropriately respond," he said.

What Pompeo alluded to a few times, was what would not be discussed: the impeachment inquiry. As he spoke in Houston, fired ambassador Marie Yovanovitch was criticizing the handling of her ouster.
"I look forward to taking a handful questions about almost anything," Pompeo said, with a smile.

Student attendees told ABC13 Anchor Steven Romo they submitted questions about the impeachment inquiry and the possible role Pompeo may have had in pressuring Ukraine to investigate Trump's political opponent, Joe Biden. Those questions, written beforehand, were not asked by the moderator, the students said.

"I was ultimately kind of disappointed that he didn't get into what everyone wanted to hear, which was impeachment, obviously," political science major Maddy Scannell said.

Students like Hannah Kaplan said, though the event was labeled as a Q-and-A, they were disappointed by the question screening.

"I certainly would have preferred the question about impeachment had been answered, seeing as it was clearly a shadow looming over the entire event," Kaplan said.
Outside the event, student protesters stood nearby holding up signs condemning Pompeo for several foreign policy matters, including the so-called Muslim ban and the U.S. military's role in the Middle East.

"(Pompeo's) policies are directly targeting groups of people, not based on whether or not they're dangerous, not based on the fact that you're wanting to keep America safe, but based in bigotry and racism," demonstrator Ari Forsyth said.

Protesters also railed against Rice University's new $30 million agreement with the U.S. Army that will seek to develop advanced surveillance and communications technologies.