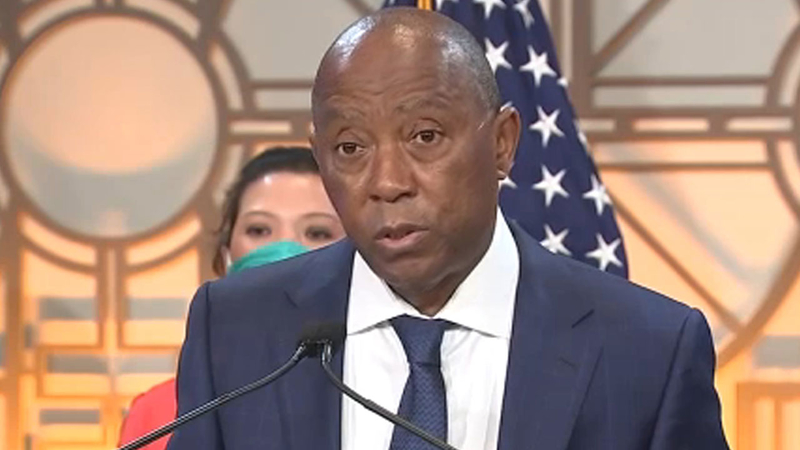 HOUSTON, Texas (KTRK) -- Several months after Eyewitness News learned cuts would be likely due to an anticipated budget shortfall of up to $200 million, the city of Houston revealed on Tuesday the true impact of the pandemic on city revenue.

Mayor Sylvester Turner, who led a presentation of the proposed city budget for fiscal year 2022, which begins July 1, announced a deficit of $201 million, the largest in the city's history.

While the deficit is certainly not the best news out of city hall, Turner assured the proposed $2.58 billion budget addresses the shortfall, with $607.8 million from a third coronavirus aid package playing a major factor in the allocation.

The loss of revenue due to COVID-19 along with our existing property tax revenue cap combine to create a $201 million budget shortfall in the General Fund – the City’s largest deficit in recent history. For the sixth consecutive year, my annual proposal closes this gap.

Still, Turner said the city faces a record revenue loss due to the pandemic.

fLike most states and local governments across the nation, the City of Houston faces record revenue loss due to the COVID-19 pandemic. In FY2020, FY2021 and a portion of FY2022 alone, we are estimating $178 million in cumulative revenue losses.

Sales tax is one of our hardest-hit sources with an expected $113 million cumulative loss for those fiscal years.

Turner also announced the budget would be adjusted to take into account the long-delayed pay raises of the city's firefighters. Last week, a state appeals court ruled in favor of the firefighters on the matter.

Although the budget presented is balanced, our work is not done. I have already outlined my plan to implement a significant number of recommendations submitted by the Mayor’s Task Force on Policing Reform. In addition, we will address fire fighters’ pay raise.

According to the mayor, the presentation begins a process that will be followed by presentations from each department, city council member amendments and a final vote/passage.

By law, Turner and the 16 council members must have an approved budget in place ahead of the start of the fiscal year.

It has been hard to ignore the pandemic's impact on the city. In February, city controller Chris Brown told ABC13 that his office projects a $200 million shortfall, leading to likely cuts to the city's workforce and services.

There's a combination of factors to blame, many of them pandemic-related but not all, Brown said. He pointed to the city's historic practice of having imbalanced budgets every year as putting it at a larger disadvantage.

We're learning the city is seeing a major budget shortfall, but what exactly does that mean?