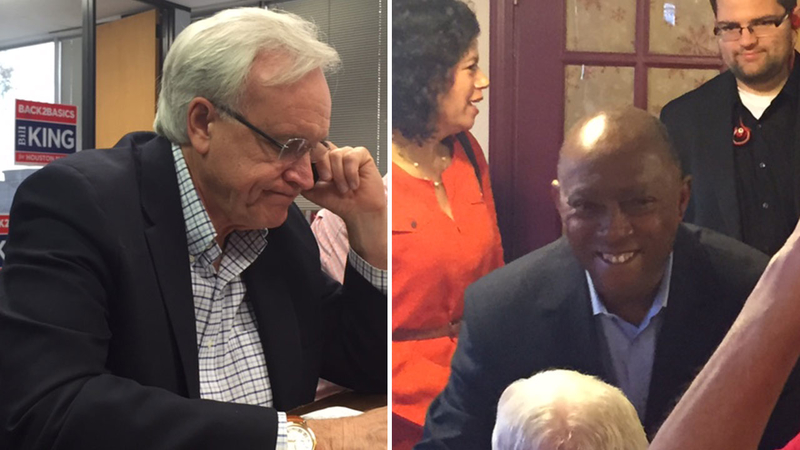 HOUSTON (KTRK) -- Early voting in Houston's runoff election is expected to account for as much as two thirds of the ballots cast. That makes the remaining votes even more crucial for the two candidates fighting it out to be mayor.

To that end, both candidates made photo-op appearances. Sylvester Turner spent Friday at a southeast Houston retirement complex. Bill King was at a phone bank, where he personally called voters to remind them to do their civic duty.

"It may be rough weather later tomorrow," he advised voters he called.

The race is now considered a dead heat. King has attracted more endorsements since the general election, from groups and former opponent Chris Bell. On Friday, former Sheriff Adrian Garcia, who did not make the mayor runoff, spoke at an event urging Democrats to get to the polls, if they haven't done so already.

Technically, Houston's elections are not partisan. Candidates don't have a 'D', 'R', or 'I' by their names. This year, their party affiliations are obvious. Turner is a Democrat, and has served in the Texas Legislature for years as one. King has been embraced by Republicans, with his no tax increase promise.

The political machines of both parties have been mobilized for this runoff.

"That prevents anyone from having a major lead, the fact both of these political forces are at play," said Dr Brandon Rottinghaus, a political science professor at the University of Houston.

How to get those voters to the polls? State Senator Sylvia Garcia says one method is called 'knock and grab.'

"That's when you knock on the door, and if they haven't voted, and say they don't have a ride, you have your cellphone and call a cab," Garcia said.

The get-out-the-vote effort begins at 7am Saturday, when the polls open.

If you're a registered voter, you can vote in the runoff even if you didn't vote in the November election. The polls remain open until 7pm.
Related topics:
politicshoustonvotingelection
Copyright © 2021 KTRK-TV. All Rights Reserved.
More Videos
From CNN Newsource affiliates
TOP STORIES