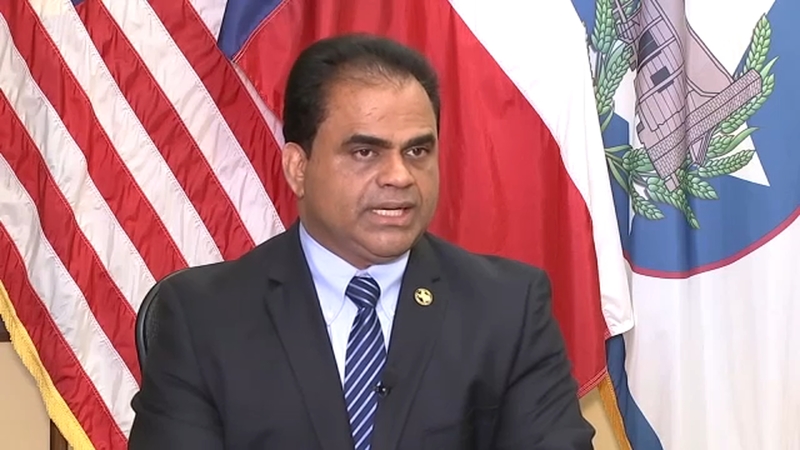 RICHMOND, Texas (KTRK) -- Not even a full 24 hours after the Greater Houston Partnership was cut from its involvement in state of the city and state of the county events in Houston and Harris County, respectively, the leading political executive in neighboring Fort Bend County said it will no longer consider joining GHP, citing the organization's silence over Texas voting reform bills.

In a statement Thursday, County Judge KP George threw his support behind his colleagues, Houston Mayor Sylvester Turner and Harris County Judge Lina Hidalgo, in their opposition to Senate Bill 7 and House Bill 6.

George echoed Turner and Hidalgo's characterization of the bills as "suppressive" to voters.

The video above is from a May 5, 2021, report on Houston and Harris County's announcement to cut out Greater Houston Partnership from their "state" addresses.

This year, Ft. Bend considered joining the @GHPartnership as a dues-paying member, but due to their deafening silence on anti-voting, Jim Crow 2.0 bills we will NOT be moving forward.

"I stand in support of Harris County Judge Lina Hidalgo and City of Houston Mayor Sylvester Turner in their actions to pull the annual State of the City Address from the Greater Houston Partnership over the Chamber's silence on Texas voting bills," George said. "The implications of silence on this issue are too consequential and that Hidalgo and Turner have decided to make that clear is admirable."

George continued, "Our County had been considering joining the Greater Houston Partnership for some time now, but following their silence on this, we will no longer consider becoming a member organization. Now is the time to take a stand, the eyes of history are indeed upon us now."

Like Harris County, Fort Bend implemented what it called "bipartisan changes" before last November's election, enabling access to polls during the pandemic. Much of these methods, including drive-thru voting, are subject to change if the bills pass the Texas Legislature and become law.

The bitter fight over Texas voting bills has pushed the two leaders to make changes to their state of the city and state of the county events.

While GHP, a key organization that boasts 1,000 members solely of Houston-area business executives, hasn't yet commented on Fort Bend County's actions, it expressed disappointment with Houston and Harris County's moves. In a statement, the organization explained how it came to a decision not to lean either way of the voting reform fight:

"The Greater Houston Partnership is proud of the important work we do with the City of Houston and Harris County, and with Mayor Turner and Judge Hidalgo specifically, as we work together to create jobs and opportunity for all Houstonians.

We regret they have cancelled these long-standing events, which our members greatly enjoy.

As Mayor Turner and Judge Hidalgo expressed, they are disappointed that the Partnership has not joined them in taking a formal position against the voting bills being considered in Austin.

We trust that Mayor Turner and Judge Hidalgo respect that the Partnership has its own process by which our 140-member board takes policy positions on behalf of our 1,000 member companies, a process that requires a clear board consensus which does not exist on the legislation. As in this case, this process does not always lead to alignment with our elected officials."

Hidalgo and Turner have clashed with state Republican lawmakers who are pushing the bills.

SEE ALSO: How Texas elections would change and become more restrictive under bill Republicans are pushing

While GOP members led by Lt. Gov. Dan Patrick have insisted the bills add more security to how votes are taken, various local and civil rights leaders throughout the state believe the bills are restrictive, especially to those who would otherwise have little access to the polls.
Patrick has even slammed Turner and Hidalgo by name over the bills' backlash, mainly coming from Texas-based corporations like Dell Technologies and American Airlines.