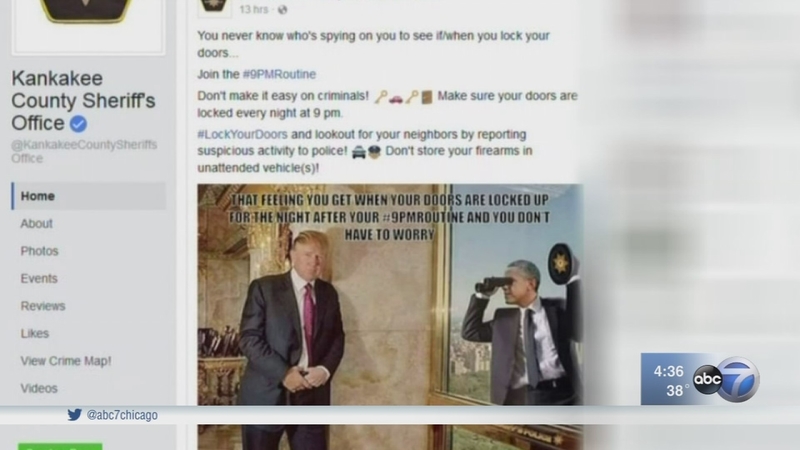 KANKAKEE, Ill. -- Some memes posted on Facebook in one Illinois country to urge residents to lock their doors at night are being called racially insensitive.

The Kankakee County Sheriff's Office published a Facebook post with an apparent Photoshopped picture of former President Barack Obama leaning into a window of Trump Tower with binoculars to spy on President Donald Trump. The post reads:

"You never know who's spying on you to see if/when you lock your doors...
"Join the #9PMRoutine
"Don't make it easy on criminals! Make sure your doors are locked every night at 9 pm.
"#LockYourDoors and lookout for your neighbors by reporting suspicious activity to police! Don't store your firearms in unattended vehicle(s)!"

A couple commenters praised the sheriff's office series of Lock Your Doors posts, which have included memes of Willy Wonka, Clint Eastwood, and a pregnant giraffe.

Almost that time Kanka-🔑 County. Remember your #9PMRoutine by locking your 🚗 and 🚪. 👀 out for neighbors report suspicious activity to 👮🏻‍♀️. pic.twitter.com/Nt8YNpz86u

It's 2017, the days of leaving your 🏠🚘unlocked are over! Join the #9PMRoutine #LockYourDoors 🔑🚘🔑🚪Don't store guns in unsecured 🚘#LockItUp 🔐 pic.twitter.com/fpJr6BdHKQ

Other commenters weren't amused by the Obama-Trump meme. One commenter said, "Is this NOT supposed to be racist?"

Another read, "Seriously you chose this picture to demonstrate that you should lock your doors. So unprofessional... SAD."

Another reads, "Very offensive. Completely inappropriate imagery. You can do better."

"An unknown white individual with an unknown a black individual - absolutely that would never have been posted. But again, when you're talking celebrities, the door is a little wider open to get people's attention," Downey said.

Trump's tie is even printed with the department's safety hashtag #9PMRoutine - a slogan intended to remind residents every night to lock all their doors - sheds, cars and garages included.

"We try to make these memes that are going to get people's attention. We focus on current events - good, bad or otherwise," said Downey, who sounded surprised at the attention Wednesday's meme was getting. "If we just post something every night to go lock your stuff up, people are going to start to ignore it after a day or two."

Downey said they've been posting those memes every night for the last three months.

"Obviously, there's no meaning to be any controversial, regarding politics, we're not into the national politics scene down here in Kankakee," Downey said.

Downey said there's no intention to offend anybody. Downey said the IT department creates the memes during their lunch breaks and off hours.

"Quite frankly, it's helped," he said.

In Kankakee County, budget cuts have reduced the sheriff's deputy count by a third, and property crime has shot up. So the social media campaign is designed to be crime-preventative.