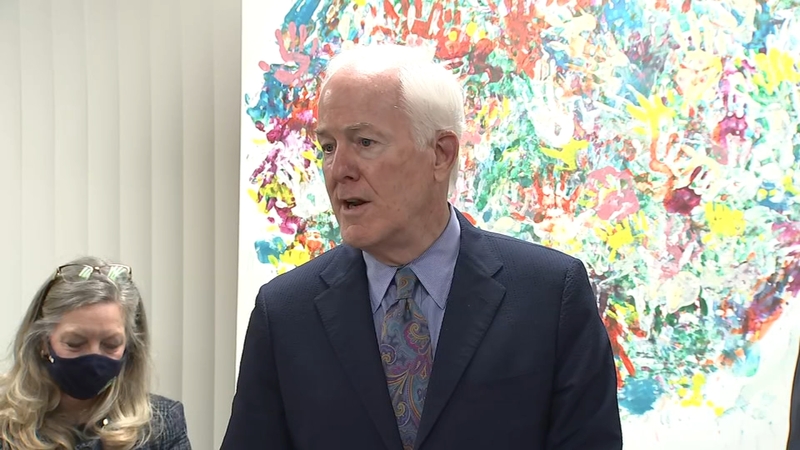 HOUSTON, Texas (KTRK) -- Texas Sen. John Cornyn toured a Houston shelter for unaccompanied minors Tuesday afternoon and said he wants to make sure the vetting process to get these children in the right hands is properly handled.

Cornyn got an inside look at a shelter for young girls, which is run by the Catholic Charities of the Archdiocese of Galveston-Houston. He sat down with CCGH's president and other leaders to get a closer look at their efforts to assist the overwhelming flow of migrants.

Cornyn also discussed his efforts to develop bipartisan legislation in response to what lawmakers on both sides of the aisle are calling a humanitarian crisis.

"I'm working with colleagues from both sides of the aisle to try to come up with policies that will give people an opportunity to have their hearing in front of an immigration judge while they are still being processed, rather than to release them with a notice to appear with 1.2 million backlog cases in immigration courts," said Cornyn.

He also made note of the impact the influx of migrants could have on Border Patrol agents monitoring drugs on the border.

"One of the consequence of flooding the border with unaccompanied children is that the border patrol, rather than stopping illegal drugs and other contraband, (and) human trafficking across the border, they are occupied with the care," Cornyn said.

"This is a tragic set of circumstances," he said.

On Tuesday, the Biden administration, for the first time, allowed journalists inside its main border detention facility in Donna, Texas, for migrant children, revealing a severely overcrowded tent structure where more than 4,000 migrants, including children and families, were crammed into pods and the youngest kept in a large play pen with mats on the floor for sleeping.

With thousands of children and families arriving at the U.S.-Mexico border in recent weeks and packing facilities, President Joe Biden has been under pressure to bring more transparency to the process.

The facility has a capacity of 250 but more than 4,100 people were being housed on the property Tuesday. Most were unaccompanied children processed in tents before being taken to shelters run by the Department of Health and Human Services and then placed with a family member, relative or sponsor.