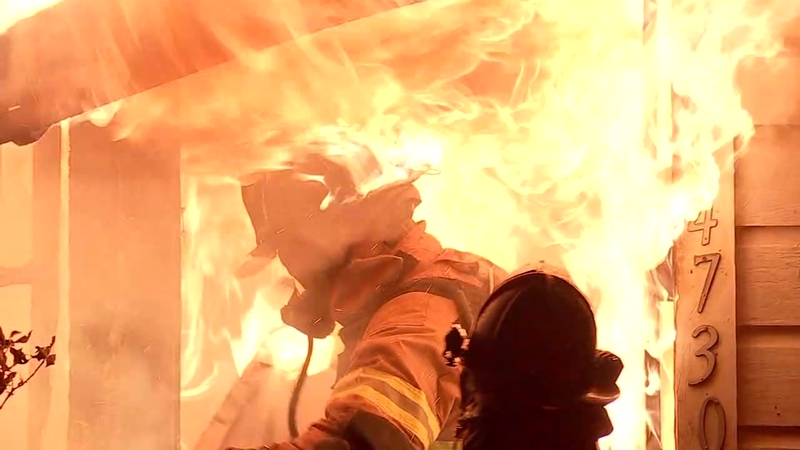 HOUSTON (KTRK) -- City of Houston estimates for the cost of a charter amendment that would raise fire department staff pay to amounts similar to police staff have risen with a newly approved contract with the city's police union, the city controller's office said.

The issue, set for early voting beginning Monday, would give equal pay to police and firefighters of similar rank.

If pay parity passes, firefighters will be entitled to that raise as well, upping the cost to the city.
On Thursday, city controller Chris Brown sent a revised estimate to the city council about how much he believed the measure could cost, raising the first and second-year estimates by $15 and $30 million, respectively.

Brown's office estimates for the remainder of this fiscal year, which runs through June, the cost will be roughly $85 million. For the first full fiscal year, starting in July 2019, the amendment will cost roughly $100 million, Brown estimates. The second fiscal year would cost $115 million.

The change comes after Houston's police union agreed to a new two-year contract worth $53 million.

City finance projects the issue will cost about $98 million in the first fiscal year but did not take into account the police pay raise.

Houston's firefighters rank near the bottom for starting pay across Texas, according to an ABC13 analysis of first-year firefighters across the state.


ABC13 asked for actual base salary amounts (not salary schedules) for firefighters in the top ten most populous cities in Texas. In those requests, we asked cities to break out any additional pay amounts, like that for equipment or longevitiy incentives. Our analysis focused on first-year firefighters only and did not include pay for probationary or cadets.

The proposition is something the city cannot afford, Mayor Sylvester Turner has said repeatedly, including in television ads paid for by his campaign and a political action committee supported by the Turner camp and the Houston Police Officer's Union.

The parity issue was spearheaded by the Houston Professional Fire Fighter's Association. It's leader says Houston firefighters haven't received a pay raise in years and are continuing to fall behind.

Marty Lancton, president of the HPFFA, said if the pay parity issue passes, he will work with city leaders to implement the changes, promising that will lessen the blow on city finances.

Turner says that he won't have that option because the ballot language doesn't allow for it.

Have a tip for Ted Oberg? A problem to solve? Get in touch with us on our tip page, or send a tip below. (On mobile? You can open our form by tapping here.)
Report a correction or typo
Related topics:
politics
Copyright © 2022 KTRK-TV. All Rights Reserved.
TOP STORIES
Coast Guard suspends search for Houston woman off Alaska coast
Child left alone starts E. Houston apartment fire
The Railroad Killer
10-month-old girl left in hot car for 'several' hours, HPD says
Known white supremacist threatening armed standoff at Texas Capitol
Katy ISD employee's husband accused of stabbing wife to death
Judge: COVID-19 asylum restrictions must continue on US-Mexico border
Show More
Track your fitness with an app? Doctors wary about certain ones
Your chance of rain is going up this weekend
Harris County Election Day process under fire by Republican Party
Woman stopped at US border with condom-wrapped fentanyl
Parents reminded they're 'rolling the dice' on kids without COVID shot
More TOP STORIES News