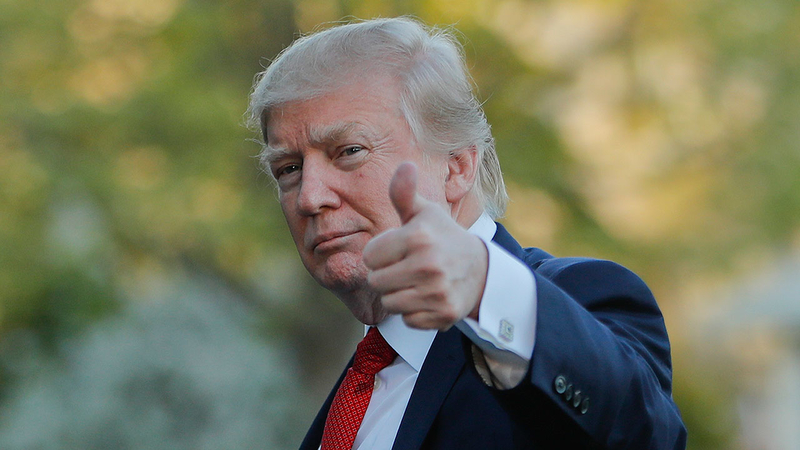 WASHINGTON, D.C. -- There's no honeymoon for Donald Trump in a new ABC News/Washington Post poll, but also no regrets: He approaches his 100th day in office with the lowest approval rating at this point of any president in polls since 1945 -- yet 96 percent of those who supported him in November say they'd do it again today.

His challenges are considerable. Majorities say Trump lacks the judgment and the temperament it takes to serve effectively. Six in 10 doubt his honesty and trustworthiness, see him as out of touch and don't think he understands the problems of people like them. Fifty-six percent say he hasn't accomplished much in his first 100 days. And 55 percent say he doesn't follow a consistent set of principles in setting policy (though fewer see this as a problem, 48 percent).

All told, 42 percent of Americans approve of Trump's performance as president, while 53 percent disapprove. That compares to an average of 69-19 percent for past presidents at or near 100 days in office -- for example, 69-26 percent for Trump's predecessor, Barack Obama.

Still, the national survey also finds some brighter spots for the president -- chiefly in pushing for jobs and in foreign policy -- as well as deep popularity problems for the opposition party. Sixty-seven percent say the Democratic Party is out of touch with the concerns of most Americans, even more than say the same about Trump, and similar to the Republican Party (62 percent). That's a steeply negative turn for the Democrats, 19 percentage points more critical than when last asked three years ago, including especially steep losses in their own base.

Trump's better grades include broad 73 percent approval of his pressuring companies to keep jobs in the United States -- even most Democrats, liberals and nonwhites approve, three groups that are broadly critical of Trump more generally. And more than half, 53 percent, see him as a strong leader, although that compares with 77 percent for Obama at this stage.

On one specific issue, a plurality, 46 percent, says he's handling the situation with North Korea "about right," as opposed to being too aggressive (37 percent) or too cautious (just 7 percent). Similarly, a recent ABC/Post poll found 51 percent support for Trump's missile strikes on Syria; together these results make his foreign policy a comparative bright spot. They're also a contrast with Obama, seen by 53 percent as too cautious in his foreign policy in fall 2014, as he dealt with Syria and Russian intervention in Ukraine.

As noted, this poll, produced for ABC by Langer Research Associates, finds no evidence of buyer's remorse among Trump supporters. Among those who report having voted for him in November, 96 percent today say it was the right thing to do; a mere 2 percent regret it. And if a rerun of the election were held today, the poll indicates even the possibility of a Trump victory in the popular vote among 2016 voters.

In two break-even results, Americans divide, 44-41 percent, on whether Trump is keeping most of his campaign promises, and likewise divide, 35-35 percent, on whether he's doing a better or worse job than they expected. Views turn negative, as noted, on how much Trump has accomplished in his first three months. Forty-two percent say a great deal or good amount, but 56 percent say not much or nothing.

Again, Obama scored far better on all three of these measures at his 100th day, 60-26 percent on keeping his promises, 54-18 percent on performing better vs. worse than expected and 63-36 percent on his accomplishments.

There are difficulties for Trump in other results, as well. Just 37 percent approve of the major changes in federal spending he's proposed (50 percent disapprove) and only 34 percent approve of his having given his daughter and son-in-law, Ivanka Trump and Jared Kushner, major positions in his administration (61 percent disapprove). (There are only three groups in which more than half approve of these appointments -- Republicans, 69 percent; evangelical white Protestants, 56 percent; and conservatives, 51 percent.) And rejecting Trump's criticisms, the public by 58-36 percent says the federal courts that have blocked his immigration orders are "acting rightly as a check on the president's powers" rather than wrongly interfering with them.

The president does better on another item on which he's been criticized in some quarters -- spending substantial time at commercial properties he owns, chiefly his Mar-a-Lago resort. Forty-three percent see this as a conflict of interest because it promotes those properties, but 54 percent say it's not a conflict because he has the right to go where he wants.

The 100-day point has been used as a benchmark since Franklin D. Roosevelt's administration, but, like any such time stamp, it has questionable predictive value. As noted, it usually marks the height of a president's honeymoon in public opinion. It's also situational. In available data, the highest rating at or near 100 days was Harry Truman's 87 percent in a Gallup poll when he took office after the Roosevelt's death; yet Truman's career average was 47 percent approval. The lowest at 100 days was Gerald Ford's 48 percent after he succeeded (and pardoned) Richard Nixon, yet Ford's career average was about the same as Truman's. Jimmy Carter and George H.W. Bush had 63 and 71 percent 100-day approval ratings -- yet neither won a second term.

Current politics, moreover, are marked by especially sharp partisanship, a central reason for Trump's comparatively poor rating. Seventy-nine percent of Republicans and Republican-leaning independents approve of his job performance; just 12 percent of Democrats and Democratic-leaning independents agree. Obama at 100 days did better in his base, with 93 percent approval from leaned Democrats, but also had 40 percent from leaned Republicans.

As mentioned, Trump's challenges don't mean the opposition is in good shape. In March 2014, 48 percent of Americans said the Democratic Party was out of touch with the concerns of most people. Today 67 percent say so. And the biggest change has occurred chiefly among the party's own typical loyalists, with "out of touch" ratings up 33 points among liberals, 30 points among Democrats and Democratic-leaning independents and 26 points among moderates and nonwhites alike.

Among Americans who say they voted in the 2016 election, 46 percent say they voted for Hillary Clinton and 43 percent for Trump, very close to the 2-point margin in the actual popular vote results. However, while Trump would retain almost all of his support if the election were held again today (96 percent), fewer of Clinton's supporters say they'd stick with her (85 percent), producing a 40-43 percent Clinton-Trump result in this hypothetical re-do among self-reported 2016 voters.

That's not because former Clinton supporters would now back Trump; only 2 percent of them say they'd do so, similar to the 1 percent of Trump voters who say they'd switch to Clinton. Instead, they're more apt to say they'd vote for a third-party candidate or wouldn't vote.

In a cautionary note to her party, Clinton's 6-point drop in a hypothetical mulligan election relates to views of whether the Democratic Party is in touch with peoples' concerns. Although the sample sizes are small, those who say the party is out of touch are less likely to say they'd support Clinton again, compared with those who see it as in touch.

Still, there's no strong evidence that defectors primarily come from groups that favored Bernie Sanders in the primary. There are no broad differences by age, and liberals are 9 points more likely than moderates and conservatives to stick with Clinton. Similarly, nonwhites are 10 points more likely than whites to say they would not support Clinton again, with more than a third of them heading to the Libertarian candidate, Gary Johnson.

Trump's rating is 10 points higher among whites who lack a college degree than among those who have one. Indeed, again echoing the election, he reaches 65 percent approval among non-college white men, vs. 40 percent among college-educated white women.

The economys another factor; while it doesn't guarantee presidential approval, a strong or improving economy at least makes it easier to achieve. Today 30 percent say the economy is improving, vs. 18 percent who say it's getting worse, with a plurality, 49 percent, saying it's staying the same. Among those who think it's improving, 83 percent approve of Trump's job performance, while among those who think it's staying the same, just 29 percent approve, as do only 10 percent of those who say it's getting worse.

There are notable differences among groups on other questions as well. One is a large age effect on whether or not Trump is in touch with people's concerns - 71 percent of under 30s say not, as do 65 percent of those age 30 to 39, declining to 52 percent - still a majority - among those 40+.

Additionally, 62 percent of Democrats say Trump is not keeping his promises, while 77 percent of Republicans say he is keeping them. (Independents split evenly.) As with views of the future economy, that's an example of motivated reasoning - sharply different assessments of the same object, informed by partisan predispositions. Whatever changes in the Trump administration, this phenomenon - typical of all politics - likely won't.