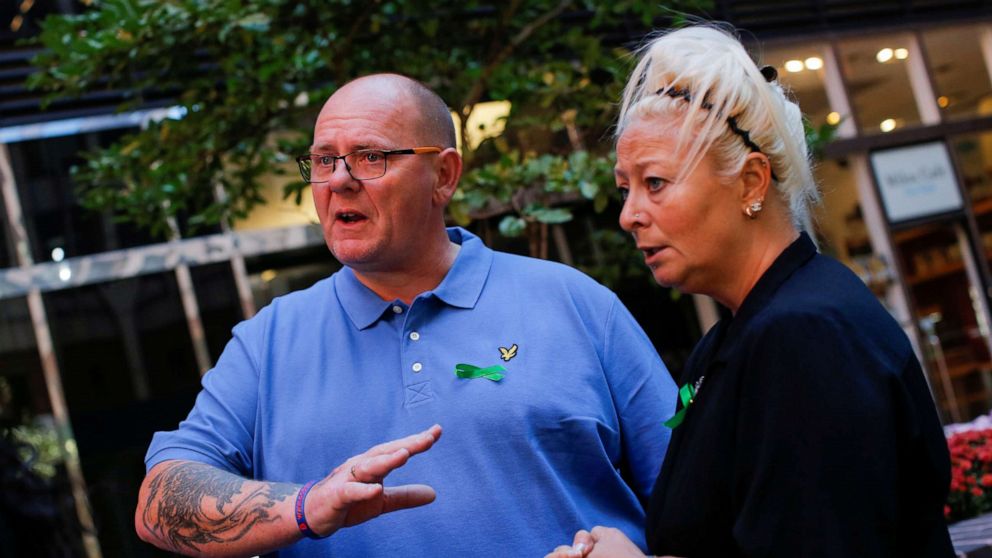 LONDON -- The U.K. police department in charge of investigating the traffic collision that killed a British teenager sparking a diplomatic row have said they will be travelling to the U.S. to interview Anne Sacoolas, the American diplomat's wife who was involved in a crash.

Chief Constable Nick Adderley of Northamptonshire Police said that officers would be travelling to the U.S. to interview the suspect, although they did not name her in the press conference.

"The suspect has cooperated fully with police and authorities and requested to be interviewed by British police officers under caution in the United States," Adderley said. "She did not want to provide a pre-prepared statement, as is her right. As soon as we have the visas available officers from Northamptonshire police will be travelling to the United States."

Police would still not be naming her because she had not yet given a full account of what happened with the collision, he said.

Dunn was riding his motorcycle along a roadway in the village of Croughton, England, on the night of Aug. 27, when a car traveling in the opposite direction on the wrong side of the road hit him head-on. The teen was taken to a hospital in the nearby city of Oxford, where he died soon after, according to Northamptonshire Police.

The crash occurred less than a mile down the road from Royal Air Force Croughton, commonly known as RAF Croughton, which is a British military station that houses an intelligence-gathering base operated by the United States Air Force. Sacoolas, whose husband is a U.S. diplomat assigned to the United Kingdom, is believed to have been the one driving the car.

Northamptonshire Police are treating Sacoolas as a suspect in the fatal crash investigation, although they have not officially named her.

Sacoolas fled the United Kingdom after apparently claiming diplomatic immunity, which protects diplomats and their family members from prosecution or lawsuits under the host nation's laws. Dunn's family have repeatedly called on Sacoolas to come back to the U.K. to face the investigation.

Trump himself spoke out about the incident, describing it as a "terrible accident" while conceding it was a "very complex issue" due to Sacoolas' claim of diplomatic immunity earlier this month.

The British Foreign Secretary, Dominic Raab, has said that Sacoolas is no longer covered by diplomatic immunity since she fled the country.

"We have pressed strongly for a waiver of immunity, so that justice can be done in Harry's case," Raab wrote in a letter to Dunn's parents seen by ABC News early October. "Whilst the U.S. government has steadfastly declined to give that waiver, that is not the end of the matter."

But in the press conference Tuesday, which Adderley described as "fairly unprecedented" at this stage in an investigation, police said their sole aim was to make sure justice was done, despite the diplomatic furor that was prompted by the incident, which has seen Dunn's parents personally speak to President Trump.

"Forget the immunity, from the police's point of view we have to make sure we maintain the integrity of all the evidence," he said. "Should we get to the point of extradition we want to insure she has a fair trial."

Sacoolas being in the U.S. "frustrates the investigation, but does not stop it," he added.

The diplomat's wife has issued a written apology to Dunn's family, which his mother, Charlotte Charles, described as "not strong enough."