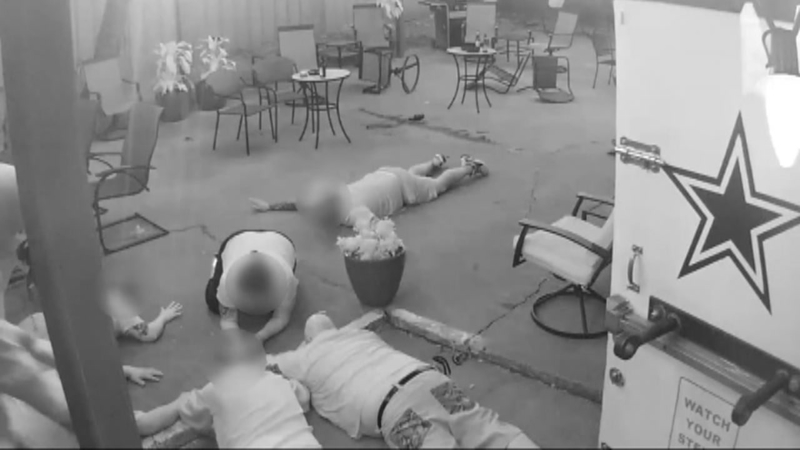 Samuel Mayfield and Timothy Huff remained jailed Saturday on bonds totaling $850,000 for each individual. Each suspect has been charged with 10 counts of aggravated robbery and two counts of criminal attempted capital murder.

Police said that Mayfield and Huff, both 33, and another suspect, Dacion Steptoe, 23, were confronted by Officer Garrett Hull and a team of undercover and uniformed officers after the trio robbed a Fort Worth Bar early Friday morning.

The 40-year-old officer was shot by Steptoe during a foot chase. Hull was taken to a hospital where he died late Friday night. Steptoe was killed at the scene by another officer who returned fire.

Fort Worth police said Saturday that with Hull's death, authorities expect to upgrade the charges faced by Huff and Mayfield.

Police said Mayfield, Huff and Steptoe are suspected in 17 robberies in and around Fort Worth in recent months, and that they primarily targeted Latino bars.

Hull is being remembered by police and city officials as a brilliant officer and a great husband and father.

The police chief said that Hull was an organ donor.

"Over the next few days as candidates are matched up with him, we will see him prolong the lives of other folks that potentially can live a long and prosperous life because of the sacrifice that he made," Fitzgerald said.

Fort Worth Mayor Betsy Price called Hull a hero who was "the glue that held his unit together."

Hull, who is survived by a wife and two daughters, had served 17 years with the department.

RIP Officer Garrett Hull. We pray for th comfort and healing of your family and colleagues and may your selfless service serve to encourage all guardians of the peace to serve in a manner that honors your ultimate sacrifice. pic.twitter.com/1hTQtkl6F6