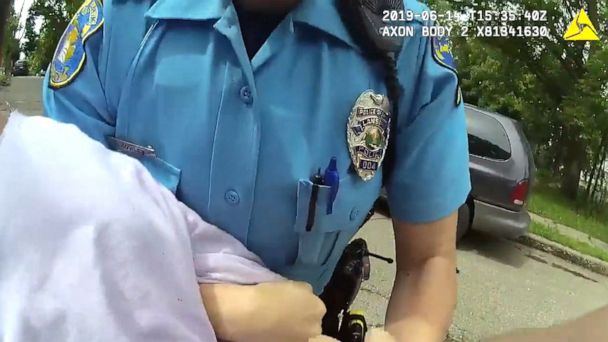 ABCNews
By JULIA JACOBO
A Michigan police department has released body camera footage that appears to show an officer striking a 16-year-old runaway they were apprehending to return to a youth center.

Officers from the Lansing Police Department were called on Friday morning after emergency dispatchers received a 911 call from a resident asking police to pick up two teens who had escaped from an in-county youth center, Lansing Police Chief Mike Yankowski told reporters during a news conference on Friday.

The teens, a 16-year-old girl and a 15-year-old boy, were being housed at the center for probation violations, and police had warrants to re-detain them, Yankowski said. Officers had been looking for them in the same area the day before, Yankowski said.

When officers arrived to the neighborhood, they spotted two people who matched the teens' descriptions who "took off running" once the officers identified themselves, Yankowski said.

Body camera footage from officer Bailey Ueberroth begins as he chases the 16-year-old girl through a residential neighborhood in Lansing. After Ueberroth handcuffs her, they walk together back to his patrol car, and she begins shouting at people on the street before slipping out of her handcuffs.

Another officer then comes to assist re-securing the handcuffs as the teen and Ueberroth struggle on the ground, the video shows, and the teen continues to yell at the onlookers on the street.

"I didn't put my hands on her," she screams in frustration. "You called the police for no reason."

The teen then falls to the ground, causing the officers to carry her back to the patrol car by her legs and arms, the video shows.

Once she was placed in the backseat, she extended her right leg to prevent the officers from closing the car door.

Officer Lindsey Howley is then seen apparently punching the teen in the thigh multiple times, a maneuver officers are trained to use as a distraction, Yankowski said.

The teen could be heard yelling at the officer to stop hitting her, but she continued to hold the car door open with her foot, telling officers "no" when they told her to put her leg in the car.

"I ain't doing s---," the teen says as multiple people on the street admonish the officers for how they handled the situation.

Once the officers finally close the door, Ueberroth starts the car and drives away as the teen cries in the backseat.

The 15-year-old male was also captured and returned to the youth center, Yankowski said. He did damage to another patrol car by kicking it, Yankowski added.

Officers are permitted to use force that is "objectively reasonable," and this case will be thoroughly reviewed, Yankowski said.

The girl was not injured in the incident and did not require medical attention when she returned to the youth center, according to the police chief.