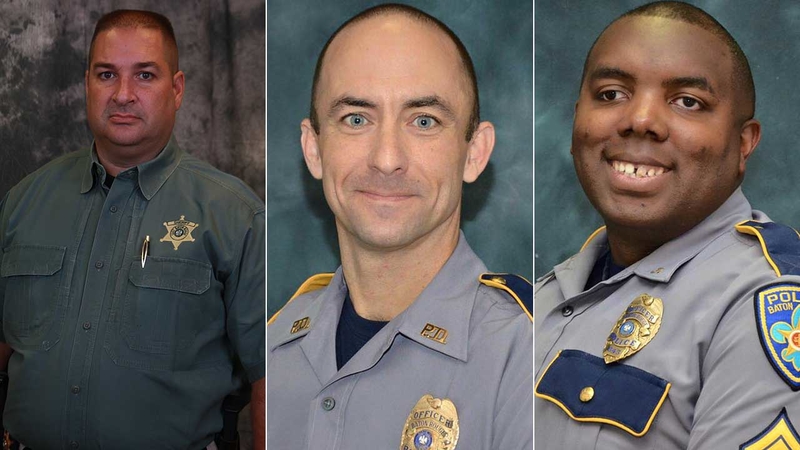 BATON ROUGE, LA (KTRK) -- A gunman and three officers he killed in Baton Rouge Sunday morning have been identified. In all, three offers were killed and three others injured in the latest violence between police and civilians.

Long, a former Marine who started duty in August 2005 and was discharged five years later in 2010, was shot and killed at the scene.

Law enforcement sources told ABC News that federal authorities are currently looking into what ties -- if any -- Long may have with the Moorish Science Temple of America. This is an anti-government movement and group that has long been under FBI scrutiny.

Long had his cell phone on him at the time he was killed. Investigators have the phone and are scrubbing it for new leads, including of course any potential associates. At the same time, authorities are trying to nail down how and when he got to Baton Rouge from Missouri, how many other weapons he may have recently obtained and where he got them, and sources told ABC News authorities are "ripping through his social media."

Law enforcement sources tell ABC News that authorities are looking into videos of the alleged Baton Rouge shooter that have been posted online.

One of the videos seen by a law enforcement source involves Gavin Long discussing religion, specifically at one time being a Christian and a Muslim. It appears that he used the pseudonym of Cosmo Setepenra.

Another law enforcement source confirmed that Long used the Cosmo pseudonym and his twitter handle was @convoswithcosmo.

His last tweet was posted nearly 24 hours ago when he wrote:

ABC News Kansas City affiliate KMBC, interviewed a neighbor and a woman who claims to be Long's aunt who confirmed that it is him in the videos.

Following the shooting, authorities initially believed that two other assailants might be at large, but hours later said that no other active shooters were in the city.

The attack began just before 9am at a gas station on Airline Highway. Long's body was next door outside a fitness center. Police said they were using a specialized robot to check for explosives near the body.

Audio of officers at scene of shooting (courtesy: Broadcastify)

One officer was sent to Baton Rouge General Medical Center and was being treated for non-life-threatening injuries, spokeswoman Meghan Parrish said.

Gov. John Bel Edwards asked the public to pray for the officers involved and their families.

"Rest assured, every resource available to the State of Louisiana will be used to ensure the perpetrators are swiftly brought to justice," Edwards said in a statement.

Edwards spoke with President Obama, who offered support and condolences for those affected by the shooting.

.@LouisianaGov: "I spoke with @POTUS and he is sending his prayers to the people of #BatonRouge" watch live:https://t.co/DT6qMGGvSj

An Associated Press reporter on the scene saw police vehicles with lights flashing massed about a half mile from the police headquarters on Airline Highway. Police armed with long guns on the road stopped at least two vehicles driving away from the scene and checked their trunks and vehicles before allowing them to drive away.

On July 5th, police officers in Baton Rouge shot and killed 37-year-old Alton Sterling, who was selling CDs in front of a convenience store. Several bystanders recorded the altercation on their cell phones, and videos of the Sterling's death were widely circulated on social media.

Five officers are dead and seven others were hurt in a shooting last evening in Dallas. Courtney Fischer reports

Demonstrators marched through downtown Houston on Sunday afternoon and called for an end to violence against all people.