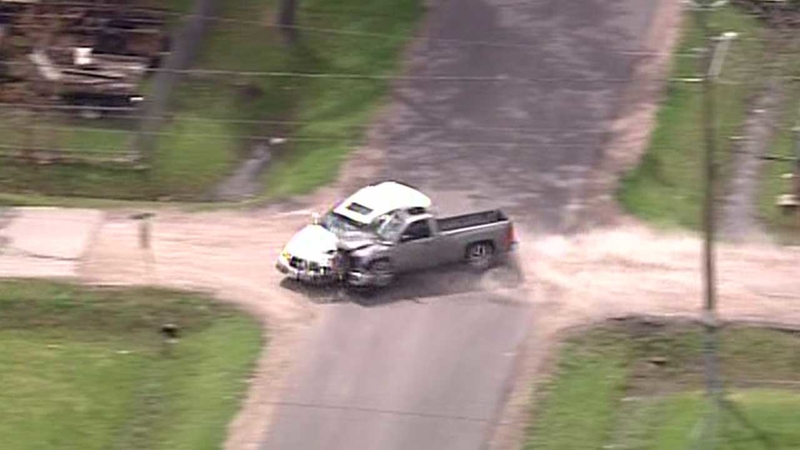 HOUSTON (KTRK) -- A high speed chase in northeast Harris County ended when a suspected carjacker slammed into an innocent driver.

Eyewitness News had the exclusive video of the end of the pursuit Tuesday. We had to blur the video because a person in the truck was thrown out of it.


The chase ended in the Cloverleaf area, but it began several miles away in Pasadena.

Not long before the truck made its way to a neighborhood, the two men in it were accused of an armed robbery in Pasadena. It was a carjacking, police say, and the truck they were in was stolen.

Police nabbed the suspect following a crash and foot chase.

Police picked up the trail with a GPS locator and the brief chase was on.

But then the truck collided with a car, T-boning it at an intersection. We're blurring the video because one of the two suspects went through the window. The other suspect ran.

It all happened in Patrick Seals' front yard.

"The car came flying through the ditch. A guy in the black hoodie came running down the street."

In the end, two arrests were made.

"And a foot pursuit and subsequently took two suspects into custody," said Lt. John Dombroa with the Pasadena Police Department.

The car driver was also injured. And it wasn't only police chasing down the suspect who ran. It involved a very feisty little dog that followed the running suspect, as well.