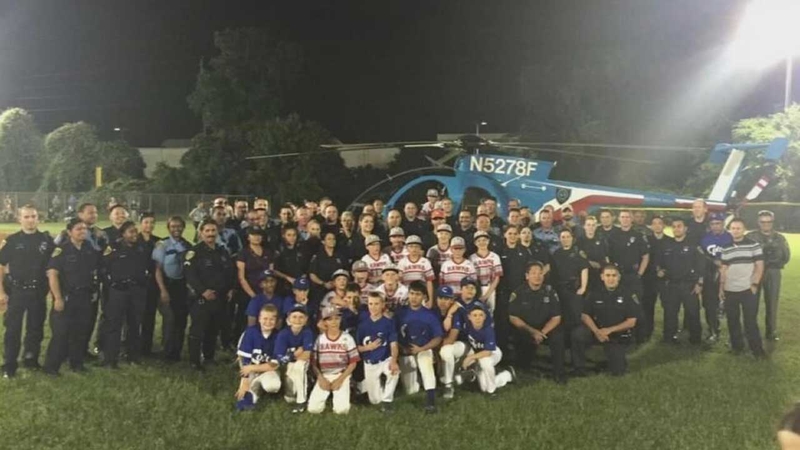 HOUSTON (KTRK) -- With just two hours notice, Houston police officers showed up en masse at a baseball game to support the son of a fallen officer.

Officer Richard Martin, 47, was killed in the line of duty Monday morning as he tried to put out spike strips to stop a police pursuit. Instead, Jeffery Conlin, 33, struck and killed him.

"His family needs us so we're going to be there," said Officer Foster who was a classmate of Martin's at HPD's academy.

Officers at every rank came from divisions from all over the city to support the 11-year-old who was the starting pitcher.

"It just breaks your heart, kids -- his dad isn't going to be here," added Foster.

"I feel honored that he wanted us to be here to watch the game," said Lt Paul George of HPD's Vehicular Crimes Division.

HPD's helicopter did a fly-over before the game followed by a pre-game prayer during which the officers lined the infield.

"Gave me goosebumps when I walked up," said Joe Davis, a father of Tyler's teammate.

Tyler then stepped to the mound. He struck out his first batter and ended up with the win. When he scored a run, he motioned upward.

"I'm proud of him. He seems pretty brave," said George.

Afterward, the helicopter landed on the field and Tyler jumped into the pilot's seat for pictures.