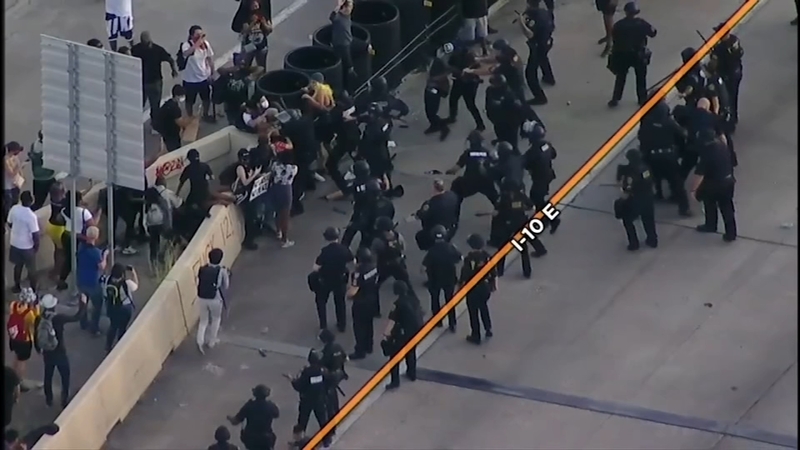 Some protesters say HPD went too far in arresting them

HOUSTON, Texas (KTRK) -- Houston Police Chief Art Acevedo has responded to criticism that officers have gone too far during the demonstrations in the name of George Floyd.

The Houston Protesters Defense Team, a group of attorneys representing protesters, said officers used rubber bullets. Some protesters said tear gas was used. In a lengthy statement, Acevedo said only pepper spray and sponge bullets were used and only in response to protester violence.

"The majority of demonstrators have been peaceful with participants loudly calling for change. I, and others from the Houston Police Department, have marched with them," Chief Acevedo said in his statement. "These individuals vandalized property and tried to take over freeways and other roadways. They have also initiated violent encounters with officers, throwing objects such as bricks, rocks, and bottles at them, in some cases causing serious injury."

Jasmine McCain says she was pelted with something and hit with a baton last Friday while she protested along the side of I-10. She admits she used pepper spray in retaliation.

She was with her siblings along the side of the freeway. She said officers told them they could stand behind a line, but then one protester crossed.

"They started attacking everyone. One brother was knocked out," she said. Seshawn Piper said he was also assaulted.

"We didn't attack anyone. We were out there peacefully protesting. If anything we were attacked," Piper said. "We were already out there protesting police brutality, so to go out there and experience it, exactly what we're protesting, it makes you lose faith in the system."

"When you see these police officers beat these girls, these young women with their batons and their fists, it's appalling," said their attorney Wilvin Carter.

More than 600 people connected to the protests and marches for George Floyd have been arrested in almost a week's time.

"There were just a tremendous amount of people being arrested that had no business being arrested," said defense attorney Charles Adams, who is offering his services pro bono.