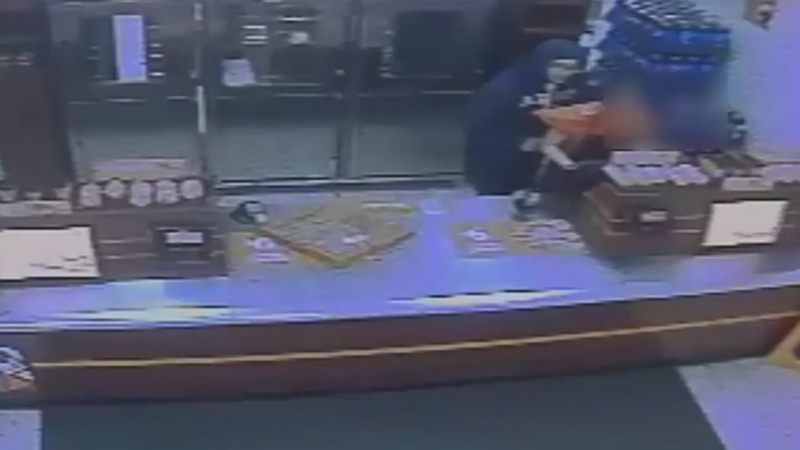 HOUSTON, Texas (KTRK) -- The Houston Police Department needs your help tracking down a serial robber. He's got an interesting M.O., appearing to be polite at first, turning aggressive if employees aren't fast in meeting his demands.

In some cases, he lets customers go ahead of him in line, and in one case, he even held the door open for someone.

Video shows the man, who's roughly 22 to 25 years old, sitting down in an Aeropostale hoodie, waiting for a customer to get her Little Caesar's order, then striking.

"He'll get in line and wait and wait 'till it kind of clears out, goes up and acts as if he's going to place an order, then pulls a gun out, demands the money, and if they kind of hesitate, he jumps over the counter," Detective Will West said.

Earlier that day, detectives think the same guy also robbed a Pizza Patron, Burger King and Church's Chicken - all within a 6-mile radius of each other in southeast Houston.

"You can't go have lunch anymore. You can't meet friends, you can't do anything, because you don't know who's watching you, who may pull a gun on you, especially with the holidays here," Sandra Comeaux explained.

Witness descriptions of the pistol, clothing and demeanor are the same at each location. Even though no one has been hurt, if he's not caught, the fear is that will change.

"People don't want to work. All they want to do is rob, steal and hurt people," Comeaux continued.

"Anything could happen. Somebody gets aggressive, tries to fight back, his hand slips, he pulls the trigger. Now we have someone shot for no reason," Detective West said.

Police think this guy got away with $500-$600 from these robberies. He's known to make his demands in both English and Spanish. If you recognize him from the video or know anything, call Crime Stoppers. They're offering up to a $5,000 reward for information leading to an arrest.

You can make an anonymous tip by calling 713-222-TIPS or online at www.Crime-Stoppers.org.