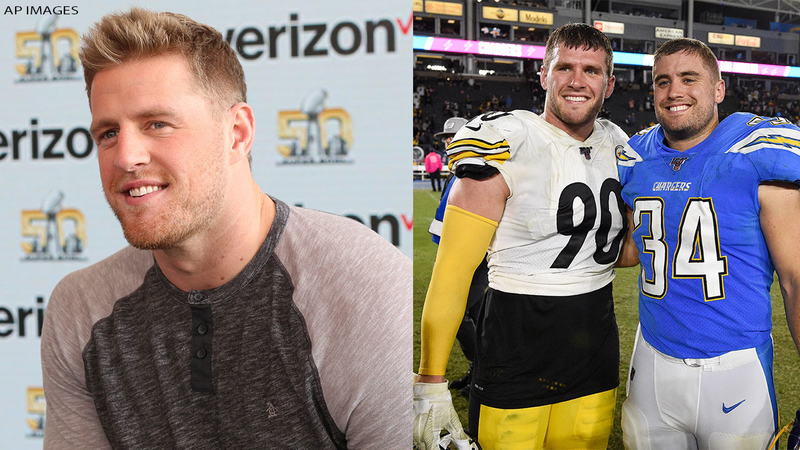 PITTSBURGH, Pennsylvania -- There's room for one more Watt in Pittsburgh.

The Steelers are adding fullback Derek Watt, brother of Pro Bowl linebacker T.J. Watt, on a three-year, $9.75 million contract, a source told ESPN's Jeremy Fowler. The deal makes Derek Watt one of the highest-paid fullbacks in the NFL.

Though the Steelers don't run a fullback-heavy offense, fullback Roosevelt Nix hasn't played more than 16% of snaps in a season. Watt will be a major piece of Pittsburgh's special teams with the departure of captain Tyler Matakevich to the Buffalo Bills.

Well this is very unfortunate in regards to the race for “favorite uncle” for Derek’s son Logan...

Also seems to put me at a severe disadvantage in the “Mom & Dad’s favorite team” category.

But damn is it awesome for Derek & TJ. Could not be happier for them and for Pittsburgh. https://t.co/zbDOsj8IPz

The Watt brothers are the second set of brothers on the Steelers' roster, joining running back Trey Edmunds and safety Terrell Edmunds.

Selected in the sixth round by the Chargers in the 2016 draft, Watt's strength is his versatility as a run blocker, pass catcher and core special-teams player, but he played in just 122 snaps on offense last season. Watt also recorded his first touchdown as a pro in a Week 14 win over the Jacksonville Jaguars.

He also played in games against brothers J.J. (Week 3 against the Texans) and T.J. (Week 6 against the Steelers) last season. A prolific runner in high school, Derek Watt totaled 2,685 rushing yards and 44 touchdowns during his prep career. He also served as the team's kicker and punter, earning Wisconsin state player of the year and USA Today All-America honors his final season at Pewaukee High School.

After a short stint at linebacker at Wisconsin, Watt switched back over to the offensive side of the football to learn the fullback position and has been there ever since, finding his true calling as an NFL player.

In addition to signing Watt, the Steelers also resigned long snapper Kameron Canaday to a two-year deal, a source told ESPN. Canaday has been the Steelers' full-time long snapper since 2017 after spending his first season in Arizona, where he appeared in three games.

Cult hero offensive lineman Zach Banner is also coming back to Pittsburgh on a one-year deal.

Used as an extra offensive lineman, and yes, eligible receiver, Banner will be even more important this year with the retirement of Ramon Foster and the expected departure of other linemen in free agency. Banner played 22% of offensive snaps last year and had some bright spots in the run game.

Against Arizona, he played 25 snaps -- including two plays where running backs gained 9 and 16 yards. Banner's one-year, $1.75 million prove-it deal, which he confirmed on Twitter Tuesday night, gives him a chance to show he's more than a gimmick.