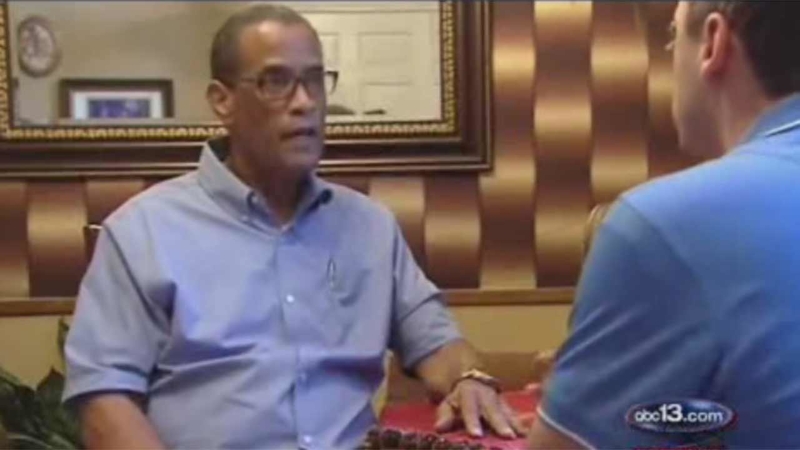 BAYTOWN, TX (KTRK) -- A pistol-packing pastor who gained national attention for taking down a suspect package thief in his front yard said he would do it again.

Pastor Benny Holmes spoke with Eyewitness News Saturday at his home in Baytown. He said pointing his 45mm pistol at the grandmother was the only way he would get her to feel the fear of God.

"The only way to get her attention was a gun in her face. And barking out on the ground or I will shoot you," said Holmes.

Surveillance video outside of Holmes home shows the entire incident. Police say Laurie Ferguson, 52, is seen pulling into the pastor's driveway last week in a red car. She's seen getting out and heading to the Pastors front door where the pastor left two bait boxes.

Holmes orders Ferguson to the ground while her two grandchildren, in the back seat of the car, begin crying and screaming. Holmes said Ferguson tried to explain she was looking for her dog.

Holmes now on the phone with police, Ferguson is seen on video trying to get up. The pastor had to straddle her to keep her down. Minutes later, police arrive and arrest Ferguson. Police said they recovered 28 stolen items from her home, just blocks away.

"He's awesome. I wish we could go say thank you to him," said Kyle Carrier.

Carrier said he and his wife had several packages stolen from their front porch a few months ago.

"People started a Facebook group about it. And people were reporting different packages," said Carrier.

They said the pastor is the neighborhood hero. Baytown police are now giving back those items to victims.

In the meantime, Pastor Holmes has a gift for Ferguson, a hat that has the word forgiven on it. Holmes said he's preparing for tomorrow's sermon in which he will tell his congregation why God said to arm yourself.