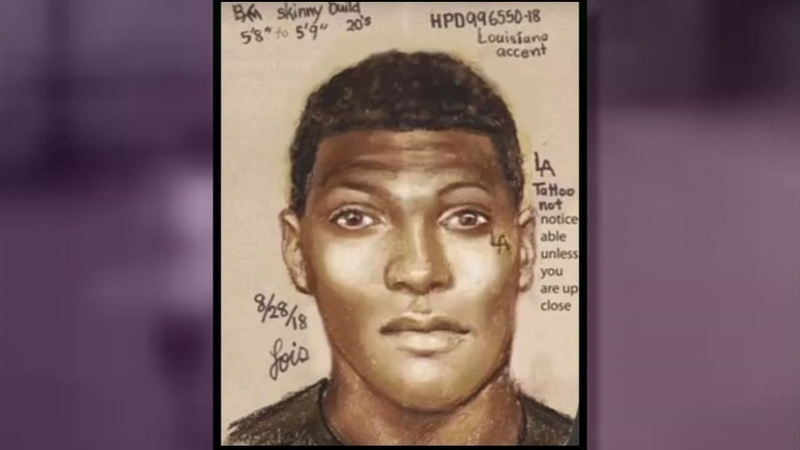 HOUSTON, Texas (KTRK) -- A woman still has the large gash on her ear after an armed robber pistol-whipped her while she walked her dog in west Houston.

It happened in the 2700 block of Wallingford. The victim says she was walking with her girlfriend when she stood in front of the armed robber.

"Out of nowhere, this dude just came out of the Village Apartments at gunpoint," the victim said.

This victim asked Eyewitness News not to identify her because the robber hasn't been caught.

Surveillance images show she and her girlfriend were walking in their neighborhood with their puppy last month when they were approached by an armed man.

Thankfully, the robber didn't shoot her, but when she stood in front of his gun, he did pistol-whip her.

"He got mad, I guess, because I stood in front of my girlfriend and he hit me with a gun on my ear and I had to go the hospital and get 11 stitches," she said.

He got away with their cell phones.

Police created a sketch based on the victim's description. She said he spoke with a Louisiana accent and he has "LA" tattoo under his eye.

In a horrifying coincidence, when she got out of the hospital, she said she saw her attacker at the drug store down the street.

"I saw him and I freaked out, because I was like, he's seen our face. He knows we have a car," she said.

"It has changed dramatically my everyday life," she said

Crime Stoppers is offering a reward for information, and the victim hopes by getting her story out, she can prevent this from happening to someone else.

"I just pray my situation helps the next person and they catch this dude because he isn't supposed to be out on the streets," she said.