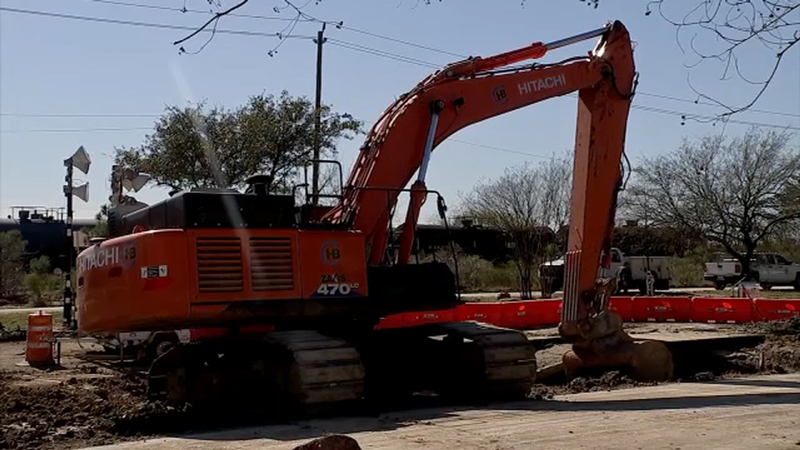 Experts say water main pipe was to new to leak

HOUSTON, Texas (KTRK) -- As crews continue to fix a busted 96-inch water main under Clinton Drive on the city's east side, the early investigation suggests the pipe was already leaking and burst when soil was removed from around it.

A city contractor had been dispatched to find a leak in the massive main near 9300 Clinton Drive. 13 Investigates was told the leak was on the side of the pipe and may not have been visible from the street. The pipe was buried 10 feet below the ground.

Crews used a backhoe to remove the first 4 feet of dirt and were digging with hand tools Thursday when the pipe erupted. Investigators believe the dirt surrounding the pipe acted like a Band-Aid, and once the heavy dirt was removed, the normal pressure inside the pipe was too much for the damaged pipe to hold, which led to the eruption.

Houston Mayor Sylvester Turner said Friday afternoon, "It (the pipe) was leaking prior to the work being done. That's one of the reasons why the company was out here because the pipe was leaking and they came out to fix it. They were out here to find the leak and then to repair the leak."

Turner has repeatedly suggested the pipe burst is another sign of the city's aging infrastructure. The Houston Public Works & Engineering department says the pipe was 35 years old.

Either way, the city and the American Concrete Pipe Association said concrete pipes have an expected service life of 50 years. By that standard, the pipe wasn't old and certainly wasn't due for replacement.

When asked about the discrepancy, Turner stuck by his assessment.

"I don't care what sort of a number you want to put on it," Turner said in response to a question from 13 Investigates' Ted Oberg, "The reality is, it was leaking. It erupted and it was a major event."

Houston Public Works & Engineering Deputy Director Jeff Weatherford said the pipe had been drained and visually inspected three and a half years ago. At that time, it passed.
Those periodic inspections are done by draining the pipe and sending someone to walk it - yet another reminder of how huge this pipe is.

Weatherford could not tell 13 Investigates how much of the city's water system was 35 years old or older, nor how much 96-inch water main was buried.

USEFUL TIPS IN A WATER EMERGENCY:
Do's and don'ts of boil water notices
Expert tips on what to do if your car floods

Have a tip for Ted Oberg? A problem to solve? Get in touch with us on our tip page, or send a tip below. (On mobile? You can open our form by tapping here.)
Report a correction or typo
Related topics:
houstonsylvester turnerboil water advisorywater main breakcontaminated waterdrinking water
Copyright © 2022 KTRK-TV. All Rights Reserved.
TOP STORIES
'It was like a mad dash:' Clear Creek ISD senior set to graduate
Man dead after being shot during road rage incident, HCSO says
CDC recommends wearing masks indoors, ahead of Memorial Day weekend
Scattered storms move in tonight ahead of front
Murder suspect dead after found unresponsive in cell, sheriff says
Astros fan from Spring celebrates 95th birthday with favorite team
Child hospitalized after found 'unresponsive' at Splashtown
Show More
Runner dies after collapsing at finish line of Brooklyn Half Marathon
Global K-pop sensation Seventeen kicks it in Houston in new tour
'NFTs: Enter the Metaverse' | Trailer
Authorities search ends for man with felony warrant out for his arrest
Early Voting holds off Epicenter to win Preakness Stakes
More TOP STORIES News