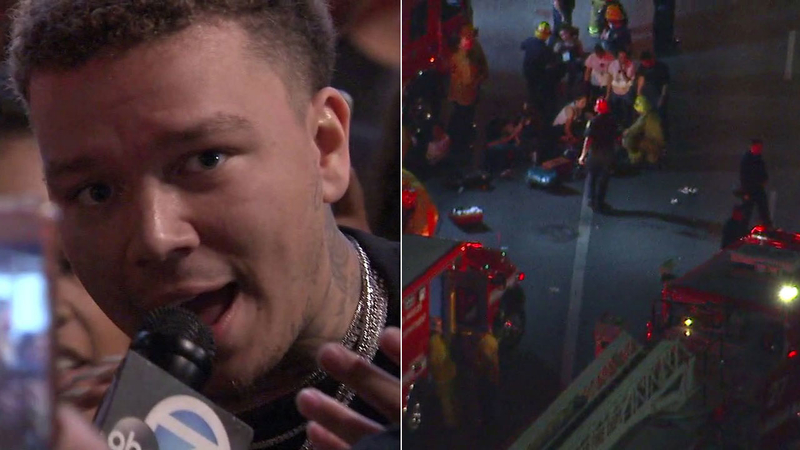 The YouTube celebrity appeared at the Shoe Palace store for a meet-and-greet. Social media reports indicated people lined up for hours to see the SoCal native, who was born Marco Anthony Archer.

The rapper had just released a new album and is about to launch a tour.

Rapper Phora speaks after several fans were injured in an unruly crowd at his promotional event at the Hollywood & Highland complex.

Some in the crowd told Eyewitness News they saw people have panic attacks and pass out when Phora came outside because of the intensity of the crowd. They said there was no stampede.

"Basically he came out and got on top of a car and everybody just came out and had like a mosh pit or something. Everybody went crazy. I saw three people just pass out," one fan said.

Paramedics said 10 people were evaluated for minor injuries at the scene and eight of those - described as teens and young adults - were taken to local hospitals for further evaluation.

Phora spoke to Eyewitness News briefly after the event.

#AT11: Just did an interview with @PHORAONE about what happened in front of the #Hollywood @ShoePalace. He was here for a meet and greet and went outside. That’s when fans tell me people mobbed him and started smashing into each other/girls were hyperventilating and passing out pic.twitter.com/uU9bimMtx2

Others on social media reported excessive pushing and shoving in the crowd.

Phora could be seen outside the store later greeting fans. He tweeted after the event that he thought there weren't any serious injuries.

"Na na na everyone good I made sure. someone passed out but she is okay now, her name is Alejandra and she says hi," Phora tweeted.

Na na na everyone good I made sure 🖤🖤 someone passed out but she is okay now, her name is Alejandra and she says hi 🤞🏼 https://t.co/QyWl9y7KiB

Not sure who I he hell Phora is, but this is nuts!!! #HollywoodandHighland #Phora pic.twitter.com/uVbICuqZGJ

I don’t know if love is hell @PHORAONE but some people hurt in Hollywood. pic.twitter.com/bX8TkrHOYJ

@PHORAONE your intentions were good i know thank you for giving us an opportunity to meet you But is there something you can do for the people who’ve been in line for 6-7 hours ? Everything escalated quickly and we were being pushed against the wall pic.twitter.com/w1A5z5PPWP