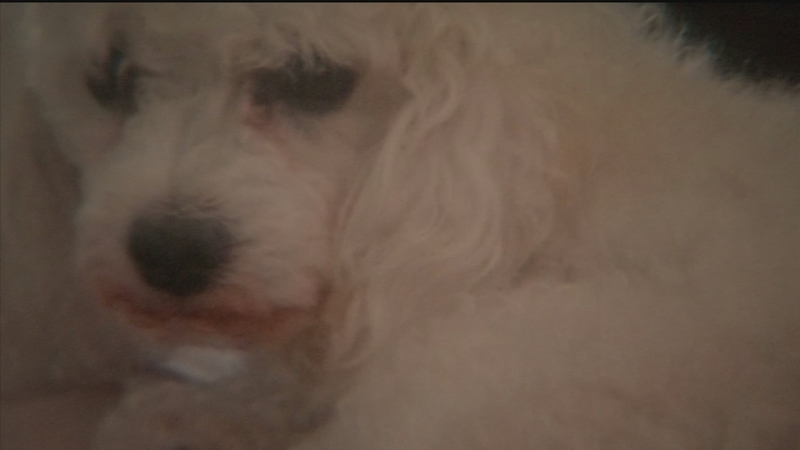 HOUSTON (KTRK) -- Call it the ultimate act of bravery. A small poodle jumped in the way of a pit bull that tried to attack his owner, an 11-year-old girl.

The incident happened on Valentine's Day. Nissan Gongora, 11, said she was getting out of her mother's car when a pit bull came charging at her.

"He was charging at me, like running and he was growling," said Nissa Gongora.

Gongora said the pit bull scared her. She said she yelled out for help. Her mother was still in the car and began to get out. Then Bobo, who was also in the car, sprung to her rescue. He got between Gongora and the pit bull. Gongora said Bobo was ready to fight.

"I was shocked and I was very glad to see him, but I didn't think that was going to happen to him," said Gongora.

Bobo lost that fight. The pit bull clamped down near his neck and backside.

"He would go away for a little while and then he would come back and start chewing on Bobo again," said Gongora.

The pit bull went away. Bobo was rushed to the ER.

"I was really sad and afraid that he wasn't going to make it through," said Gongora.

After having surgery, Bobo is doing better. He's expected to live. Gongora said she spent every dime she saved from her college savings to pay the vet bill. The family was also given money from neighbors after spending what money they had. They said it was the least they could do for Bobo, the poodle they call family.

"He was willing to give up his life for any of us. So we had to do that same for him. We had to find a way for him," said Gongora.

Gongora said animal control officers found the pit bull and removed it from the neighborhood. Bobo is expected to be released from the vet this weekend.