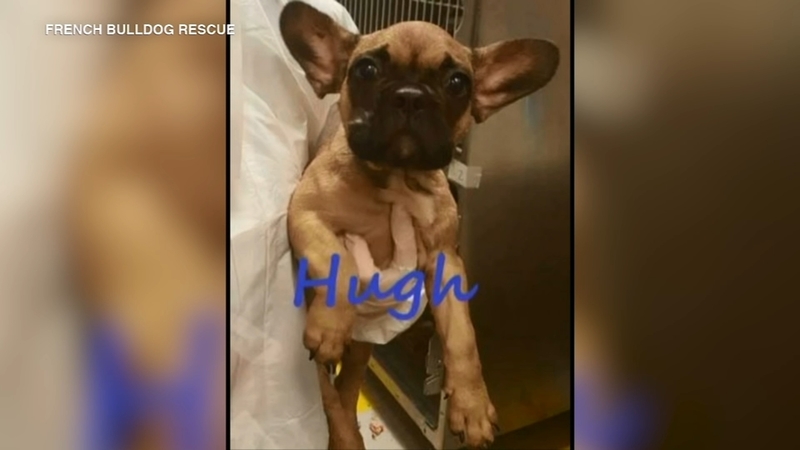 CHICAGO, Illinois -- The 23 French bulldog puppies who were rescued from a hot van in Texas will not be ready to be adopted for at least two months, said a Chicago veterinarian who is treating the dogs.

Meanwhile, an overwhelming number of people have been asking about adopting them.

The ailing puppies arrived in Chicago last week after being rescued on July 12 when Texas state troopers made a traffic stop. They were packed tightly in plastic crates, suffering from various stages of heat exhaustion. One puppy died.

Chicago French Bulldog Rescue said it was 121 degrees in the moving van when the puppies were found without access to food or water.

Now, the dogs still need continuous round-the-clock care but they are getting better.

"They're running all over and climbing on you and they weren't doing that initially," said Dr. Jennifer Deyo.

"The ones that I have seen both in Texas and here in my care were extremely underweight," she said. "They had bloody diarrhea, malnutrition. They were in pretty poor shape."

And they're already gaining weight.

"I mean, that's just horrific to think that's what they needed was just food and proper medication," Deyo said.

The dog's long journey allegedly began July 10, when the Humane Society said 28 French bulldog puppies flew as cargo from Kiev, Ukraine, to Chicago. The next day, the Humane Society said, two individuals loaded the dogs into a moving van that was "not climate controlled" and drove toward Houston. That's when they were stopped by state troopers.

Police in Texarkana arrested 19-year-old Adam Darwish and 18-year-old Mahmoud Eid, who were charged with 28 counts of "cruelty to a non-livestock animal."

Twenty-three French bulldog puppies that were rescued in Texas have arrived in Chicago for rehabilitation and adoption.

The puppies' documentation listed their age at six months old, but based off her assessment that wasn't the case, which she says made their journey from Ukraine more dangerous, Deyo said.

Currently seven of the 23 puppies are now in foster care under veterinary supervision.

"It's going to take weeks of healing for the intestines to get to a normal state so they are going to stay on medications long-term. They have to be on special food long-term," Deyo said.

The others are still recovering and the process, Deyo said, will take time but so far so good.

"It's been really fun to see them as they continue their isolation in the foster homes, continue to get healthy and doing more puppy things and playing with toys is probably my favorite," she said.

As Chicago French Bulldog Rescue gets overwhelmed with requests, they want to remind potential adopters that they do have other dogs that are now in need of homes.