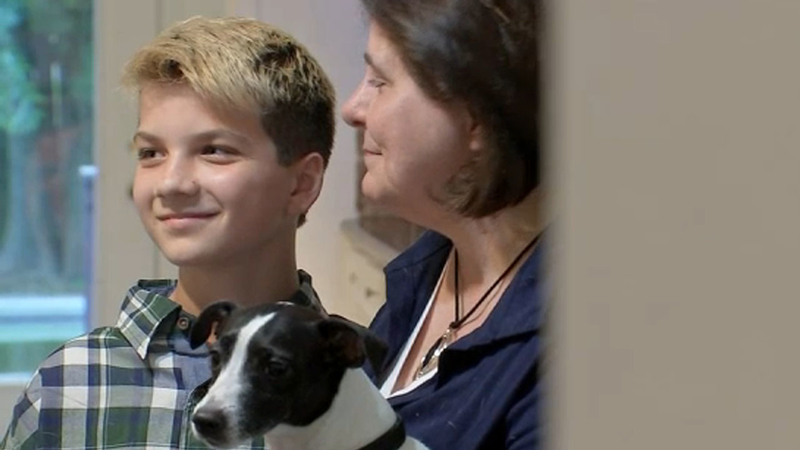 HOUSTON, Texas (KTRK) -- Lost pet signs are common in Houston. Some of the animals are returned, and the rest are never recovered.

11-year-old Jack was away at a church camp when Saylor disappeared.

"The whole time I was there I kept thinking about her and if she was okay," he said.

"I knew I had to do something fast. As you hear on TV, you have 48 hours." Katcher immediately went into action, posting on social media, and making large signs that offered a $2,000 reward for the return of the family pet.

Family pulls out all the stops to find lost dog

Those hours came and went without result. Katcher then set up a web page, findthisdog.com, posting pictures of Saylor. It generated several hundred emails, but no immediate lead.

"I never believed she wandered away. She was never really lost. She was taken," Katcher said.

More investigation led her to suspect a man who was living with a neighbor, but was kicked out.

She posted pictures of his truck, a license plate number, and she contacted police.

An officer took an interest in a desperate mother trying to reunite Saylor and her son. "He checked every day," she said. Then came a phone call from someone who said Saylor had been kept in a storage unit for 18 days. The caller wanted the reward.

She agreed to meet the caller at a house. Police accompanied her, and Saylor was returned.

The caller hadn't stolen the dog, but information led police back to the storage warehouse where court papers show 47-year-old Dutch Christopher Lindeburg was charged with misdemeanor theft, involving Katcher's dog. He was released on $100 bond.

The work was worth the result, when Jack and Saylor were reunited. "I know I can't save him from all the heartbreak he'll get in his lifetime, but I can do this one," Katcher said.

Jack said he plans to write a story.

"I want to motivate other kids to find their dogs. And to keep going without giving up on finding their dogs," he said.

He plans to call the story "Finding Saylor."