'Loose tiger could be around corner' unless laws change, PETA says 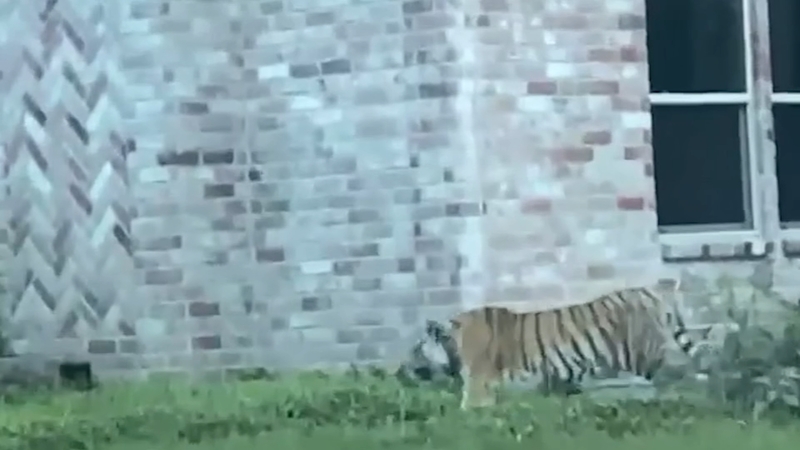 HOUSTON, Texas (KTRK) -- With a tiger that was seen roaming a west Houston neighborhood still nowhere to be found, we wanted to take a look at what to know about tigers and the dangers of trying to domesticate them.

As "TigerGate" and "Tiger in Houston" trended on Twitter, people wanted to know, how did this happen? Another question that popped up often was regarding the laws surrounding ownership of exotic animals in Texas, especially since this is far from the first time a tiger has gotten loose.

"In Texas, it's regulated county by county whether you can own a dangerous wild animal. In your large cities like Houston, San Antonio, Dallas, it is illegal to have them. But in other counties, there is either no regulation or only a permit that anybody can apply for," said Noelle Almrud, senior director at the Cleveland Amory Black Beauty Ranch in Murchison, Texas.

Tigers are not allowed within Houston city limits unless the handler, such as a zoo, is licensed to have exotic animals. Texas has no statewide law forbidding private ownership of tigers and other exotic animals.

Almrud is especially concerned when people try to domesticate dangerous wild animals, which is what a tiger is considered.

"The average person is not going to be able to meet the needs of that animal, whether that be psychologically for enrichment, activity-wise, space-wise, diet. They have a very complex diet," Almrud said. "We see it time and time again when we take in former wild pets, they have nutrition deficiencies, metabolic bone disease."

PETA released a statement blaming what it called were "lax" federal and state laws for the reason this latest incident happened in Houston.

"This close call shows why every American should support the Big Cat Public Safety Act: Until law enforcement cracks down on people who breed big cats, keep them in shoddy backyard cages, and sell photo ops with them, a loose tiger could be around any corner-and injuries and deaths could easily follow. PETA urges Texas authorities to crack down on the state's underground big-cat trade, track down this tiger, and get this animal into an accredited sanctuary," said PETA Foundation Deputy General Counsel for Captive Animal Law Enforcement Brittany Peet.

The prohibition would only apply to big cats kept as pets. Sanctuaries, universities, and zoos would be exempt.

What's next for the tiger spotted in west Houston?

Well, after it's found, and authorities are hoping that's soon, it's unclear where exactly the tiger would go next.

Almrud said that the Cleveland Amory Black Beauty Ranch doesn't have space for this particular tiger, but the sanctuary is a member of the Big Cat Sanctuary Alliance, an organization of legitimate sanctuaries, that can help place the animal.

What kind of tiger was loose in that Houston neighborhood?

The suspect seen with the tiger, Victor Cuevas, has been seen in Instagram videos and pictures with multiple exotic animals, including a Bengal tiger. But we don't know for sure the tiger that's missing is that particular species.

Bengal tigers are the largest existing member of the cat family, according to National Geographic. A tiger can eat as much as 40 kg, or 88 pounds of meat, in one feeding.