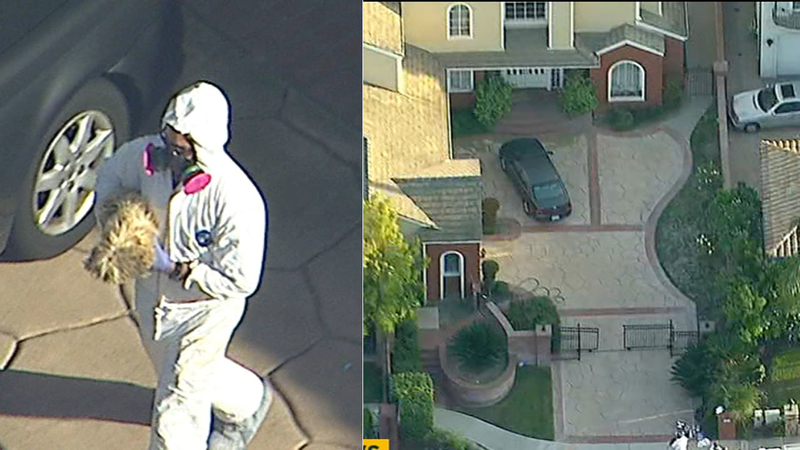 ORANGE, California -- An investigation was underway Thursday after 136 dogs were found living in reportedly deplorable conditions in a multimillion-dollar home.

Orange County police were called to the home around 2:20 p.m.

They found dogs living in filthy conditions, and began one-by-one removing them from the home, some of them covered in their own filth.

Orange County Animal Care was seen taking dozens of dogs out of the residence. There were so many dogs inside that the sad parade of the ragged animals took hours to complete.

"It was a mess. It was uninhabitable," said Orange PD Sgt. Phil McMullin. "We suspect that they are in every single room inside the house."

A citation was issued and the house was red tagged, authorities said.

The homeowners, who have been living in the home with the dogs, were identified by neighbors as Jo and Ed Reitkopp. He's a lawyer, and she's an organizer for President Donald Trump.

Neighbor Lisa Paul bought a dog from Jo back in 2010.

"We went in and she brought all the dogs out in this little plastic container, and we played with all of them," Paul recalled. "The house was clean, it smelled good. We thought we were buying it from a lady who breeds Shih Tzus.

"When I walked up and I saw it was this house, I just broke down crying," Paul said.

It's unclear whether the owners were running a puppy mill from inside the home.

The rescued dogs are receiving veterinary care and eventually are expected to be put up for adoption.

"It's all hands on deck. We have staff here right now making sure that every single dog is properly cared for, comfortably housed, and then we're going to be monitoring them," said Mike Kaviani from Orange County Animal Care.

The owners have been cited for misdemeanor animal cruelty, but officials said they could later be increased to felony charges.