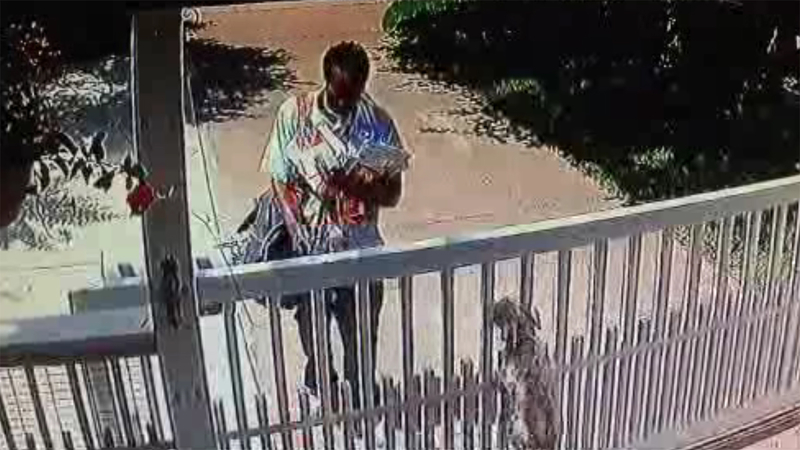 HOUSTON (KTRK) -- The mailman caught on camera spraying three lap dogs with what appears to be pepper spray has been charged.

In video exclusive to Eyewitness News, a uniformed US Postal Service letter carrier is seen approaching a home in northwest Houston. The dogs run to a tall gate and are sprayed with what appears to be pepper spray. Their owners said they couldn't open their eyes for 3 hours afterwards.

The dogs never seemed to pose a threat. The mailman and the mailbox were on one side. The dogs were on the other.

According to court documents, O'Veal told investigators with the Harris County Precinct 5 Constable's Office "he observed the dogs and their teeth. He sprayed the dogs as he was trained to do." Attempts to reach O'Veal for a response were unsuccessful.

The dogs' owner, Jose Cruz, doesn't believe that explanation and he didn't want the mailman fired or even charged. He only wanted to him to learn a lesson and to that end, Cruz thinks he has the perfect punishment for the man accused of hurting his dogs.

"I think a little community service. SPCA, that's where we got Bella. We rescued her. It hurts what he did," Cruz told Eyewitness News.

The USPS has not responded to a request for comment. A spokesman has said they couldn't comment on whether the mailman was disciplined because it's a personnel matter.

O'Veal has a warrant out for his arrest. He has no criminal record in Harris County.
Related topics:
houston
Copyright © 2022 KTRK-TV. All Rights Reserved.
TOP STORIES
Officials say arrest of man in corporal's murder was state-wide effort
Deputies escort body of fallen HCSO Sgt. to funeral home
Biden confirms he will nominate first Black woman to SCOTUS
Armed driver was trying to rob another driver on Katy Fwy, police say
These jobs are hiring, and they pay more than $14 an hour
Cool temps through the weekend with a warm-up next week
K9 stabbing suspect accused of killing father with dumbbell
Show More
No bond granted for suspect in Pct. 5 corporal ambush killing
Attorney of man questioned in dad's death wants him to seek help
HPD officer's bodycam video released in crash that killed 75-year-old
You could get paid to get your COVID vaccine or booster
World remembers Holocaust as antisemitism rises in pandemic
More TOP STORIES News