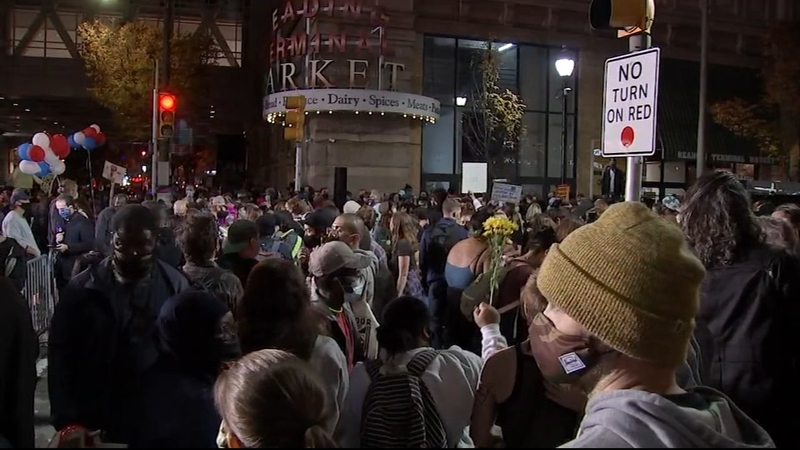 PHILADELPHIA -- Protesters gathered Friday outside of the Pennsylvania Convention Center where the votes are currently being tallied in Philadelphia.
Three days after Election Day, both Biden and Trump are hotly contesting Pennsylvania's 20 electoral votes. If Biden wins the Keystone State, he would be the projected winner. Trump needs Pennsylvania and three of the four uncalled battleground states in order to keep his seat.


On one side, it's a dance party - complete with Elmo and a drum line - in support of Democrat Joe Biden, and on the other, President Donald Trump supporters.

We found him: #Philly Elmo. The drumline has arrived to the #Pennsylvannia Convention Center #Jawn #Election2020 #BattlegroundState @6abc pic.twitter.com/HA6cO7aMqP

The Trump side says they just want transparency. They demand Trump representatives be able to watch the votes be counted, responding to Trump's baseless claims of widespread fraud in the race for the White House.

"I want the Republicans and the Democrats to come together inside and count these votes correctly," said Trump supporter Brenda Horton.

Chopper 6 over dueling protests outside Pa. Convention Center in Philadelphia on November 5, 2020.

The Biden side says they just want every vote to be counted and feel the Trump administration is trying to deny that.

#Election2020: and the dancing commences in #Philadelphia...

"I deserve the right to vote and have my vote counted," added Biden supporter Gwendolyn Hardeman.

Dance party continues on one side.
President supporters asking the city “stop the count”@PhillyVotes: We have ~40,000 ballots left to sort/review. @6abc #BattlegroundState pic.twitter.com/rYcieS9dzW

"I hope that at the end of this like we can come back together and remember what America is about," said Carissa Forde, of Philadelphia.

Pennsylvania vote counters edged closer to wrapping up their tallies Friday, with mail-in votes giving Biden a narrow lead in the fight for the state.

Pennsylvania elections officials were not allowed to process mail-in ballots until Election Day under state law, and those ballots have skewed heavily in Biden's favor after Trump spent months claiming without proof that voting by mail would lead to widespread voter fraud.

Protesters gathered Friday outside of the Pennsylvania Convention Center where the votes are currently being tallied in Philadelphia.