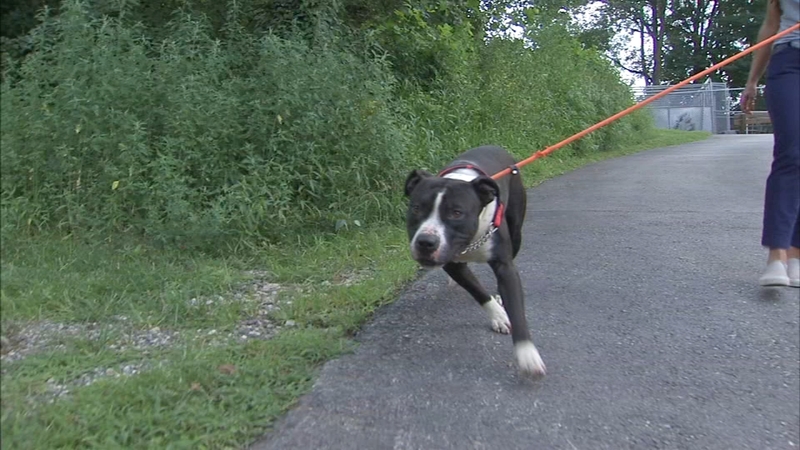 DARBY, Pennsylvania -- An animal cruelty investigation has been launched after a pit bull mix was found tied to the railroad tracks near Darby Station.

Providence Animal Center is now taking care of the dog, they named Thomas, while the investigation continues.

They posted a picture of Thomas along with a Darby Borough police officer who they say found him following a 911 call.

"Thomas was found tied to the train tracks in Darby. Luckily, he met his hero today. If you have any information that could be helpful to us, call 610-566-1370 x214. For now, let's focus on the good: he's safe now and we will do whatever it takes to give him a future where he'll forget his past."

Saturday, Director of Operations for Providence Animal Center, Dayna Villa, says they've received tons of calls and Facebook comments asking about how to adopt Thomas, but for now he has to stay put. Luckily, he was not injured.

"He's an active cruelty investigation, so he has to stay here," Villa said. "So, we'll continue to learn more about him and have our volunteers and staff interact with him and when it's appropriate and safe we'll put him around other dogs and children, just like we do with all of our dogs."

They don't know Thomas' age or exact breed but say he has no outward signs of trauma. Villa is not sure how long he was tied to the tracks but says she guesses it may have been overnight.

Police received a call about the dog Thursday night around 9 p.m. and he was promptly found.

"This one was really hard to wrap your head around. It's going to be really difficult to understand how someone could do this," Villa told Action news on Saturday. "He's just ready for us to get justice for him."
Report a correction or typo
Related topics:
pets & animalsanimal crueltypennsylvania newsanimal abuse
Copyright © 2022 KTRK-TV. All Rights Reserved.
TOP STORIES
Lina Hidalgo suggests DA could have her 'indicted' as political ploy
Police have no leads on skeletal remains found nearly 6 months ago
18-year-old arrested in shooting death of man with cane, HPD says
Man shot to death during argument in hotel parking lot, HPD says
Pattern change brings more rain chances to the forecast
1st monkeypox case in US this year reported in Massachusetts
Texas has 10 days to fix Harvey plan that gave Houston $0, feds say
Show More
Fort Bend ISD expands prekindergarten program to 35 campuses
New photos released as search for escaped Texas inmate continues
Corvette owner opens fire on theft suspect who later dies, HPD says
Pasadena business owner cleared to open shop as he fights ordinance
Man convicted of raping 86-year-old woman in 2020 gets life in prison
More TOP STORIES News