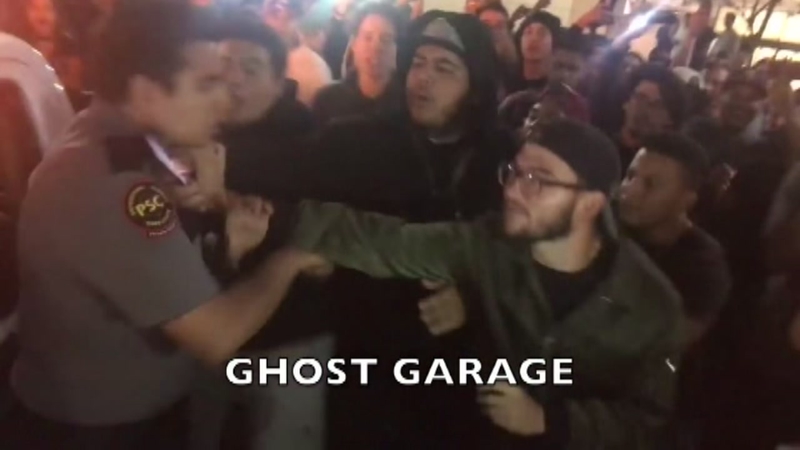 WEST COVINA, California -- A revved-up tribute to late actor Paul Walker in West Covina got out of hand as two mall security guards and their vehicles got roughed up by the boisterous crowd.

Video recorded at the scene shows hundreds of people showing up at the parking lot of the West Covina Plaza.

Witnesses said cars at the sideshow were spinning out and doing donuts in the parking lot in honor of what would have been the "Fast and the Furious" actor's 45th birthday. Walker died in a car crash in 2013 at age 40.

Some security guards got into a scuffle with members of the crowd and video shows damage to their vehicles, including a cracked windshield.

"It's alarming when we see this in the video. The behavior of the people that are gathering at these car meets wanting to beat other people up or just damage property - it's just not acceptable," Lt. Travis Tibbetts said.

West Covina police confirm they are investigating the incident as felony vandalism and assault and battery to the two security officers.

It was actually the second city the rowdy group had gathered in for the night. They had originally gathered in Montebello, but were chased out of the area.

"I think the video is pretty clear and I think there's someone out there that can help us identify who those suspects are that damaged that car and then hurt those security officers," Tibbetts said.