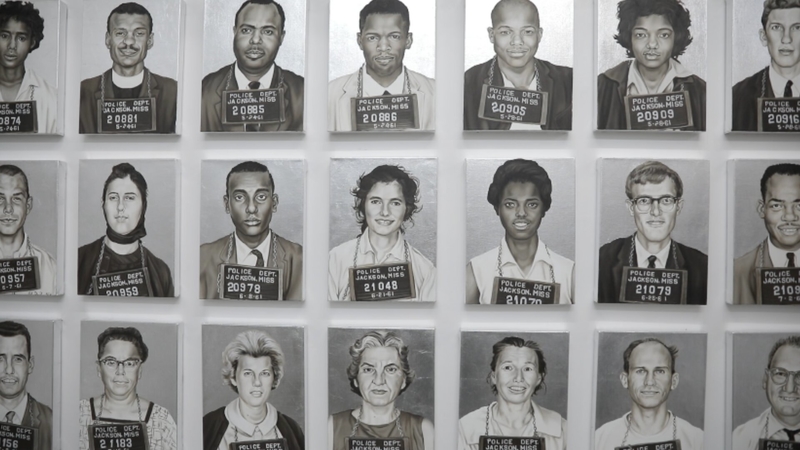 "Portraiture sort of found me, so I've been doing portraiture my whole life," began Morin. "It's telling people's stories."

Morin focuses on commission portraiture and portrait-based projects through which he serves as a medium for communicating messages from the sitter to the viewer.

Organized by James Farmer, the Co-Founder of the Congress of Racial Equality (CORE), the Freedom Rides protested segregation on interstate buses and bus terminals. Over 400 volunteers participated in the interracial bus rides through the U.S. South to test the Supreme Court ruling in Boynton v. Virginia (1960) that deemed segregated transportation facilities unconstitutional.

After John Lewis's passing in July 2020, Morin discovered an article showcasing the mugshots of Lewis and several Freedom Riders. He noticed many smiling faces amongst the photos and decided to paint portraits of the expressions.

"You have to imagine what they were going through, they were all facing prison," began Morin, "and yet, they were still smiling. And I think it has to do with the joy of being part of a movement that is bigger than yourself."

Morin also arranged the portraits in booking number order to serve as a true chronology of when the 24 featured Freedom Riders were arrested.

"It's a very powerful statement that 400 people were able to do this consistently, you know day after day," said Morin. "They were challenging the system, and I think it's important for people now to realize. And I hope it inspires them."

To commission a portrait, visit here.