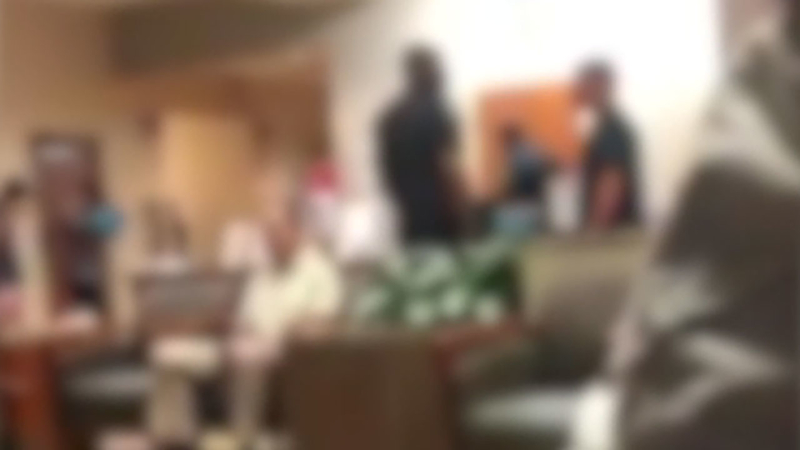 CELL PHONE VIDEO: Man appeared to be bleeding out on emergency room floor

Because of how graphic it is, and for the privacy of the patients, we've blurred the video and altered voices.

Arnold Salas, 24, told ABC13 Eyewitness News he cut an artery in his arm when he punched through glass.

He claims when he arrived, hospital staff told him all the beds were full.

"They kept telling me that I had to wait and my arm was bleeding," said Salas. "I was like 'Can I get in?' and I tried to go to the back and one of the officers said 'You can't go to the back' because I was trying to see somebody and I felt like I was going to pass out."

Tamra Torero took the video. She saw Salas holding his arm wrapped in a towel and bleeding profusely.

"Here he is trying to deal with his blood," she said. "It was just an uncomfortable situation for everybody."

Salas said a hospital staff member checked his vitals and told him he was fine.

Salas says he did eventually pass out and then went into shock, but not before he says bystanders in the waiting room attempted to help him by using a belt as makeshift tourniquet.

In the video, another man was visibly upset with hospital staff.

"At one point, (Salas) fell to the ground," Torero said. "The young man was just shaking on the ground and I was, like, terrified."

Salas' mom says she had been in touch with the hospital and says her son has 11 stitches.

He says he hopes "that they get the attention they need to fix their staff."

ABC13 reached out to St. Lukes. They responded with the following statement:

"CHI St. Luke's is very concerned about the images that have been posted online and we are investigating every aspect of this incident. These images do not reflect a level of care consistent with what we expect of ourselves.

We have reached out to the patient to discuss his care. We may have further comments following completion of our review, and appropriate permission from the patient. We take our obligations to protect the privacy of our patients seriously, and will not compromise their privacy without their permission. Regardless of whether we can speak further about the matter, we will take appropriate action to deal with any issues identified by our review."