Act of kindness leads to the return of a valuable backpack 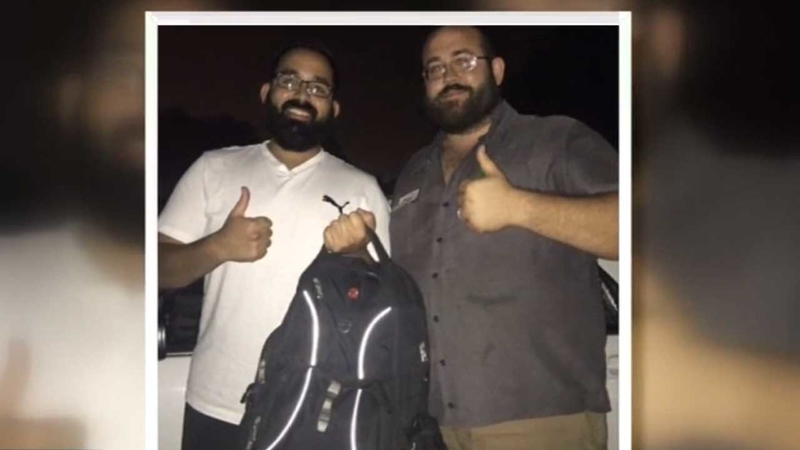 PASADENA (KTRK) -- A Pasadena man had all but given up on finding his stolen backpack when a Good Samaritan saw the value of its contents and found him.

"I didn't know it would be something so important," said Jason Anderson.

Guerra and Anderson didn't know each other until Wednesday night and it was, of all things, a backpack that brought them together.

"I was like oh my, my backpack," said Guerra.

It wasn't just any backpack, stolen from the backseat of Guerra's car in Pasadena. It was his school backpack full of a semester's worth of chemistry and microbiology notes.

"I take really, really good notes and I was like, wow, I'm lost here," Guerra said.

Guerra quit his job and works part-time as a bartender so he can focus on school and finish his required courses in hopes of being accepted into the nursing program at UTMB. He has two tests coming up. Passing them seemed futile without his notes, until Jason Anderson found him.

"The subject was "found your backpack, give me a call," Guerra said, reading Anderson's email.

Anderson, a wrecker driver, was driving near Crenshaw and Young in Pasadena less than an hour after Guerra's car break-in when he saw the backpack lying just off the road near a fence. He found Guerra's email address inside. The two met and they realized they have something in common-something that will keep them connected and it all leads back to the backpack.

"He and my wife are going to school for the same thing and he's ahead of her. He's going to guide her so it's paying it forward," Anderson explained.

"You know what? There are good people, people who don't want to take advantage, who care and he's one of them," Guerra said of Anderson.