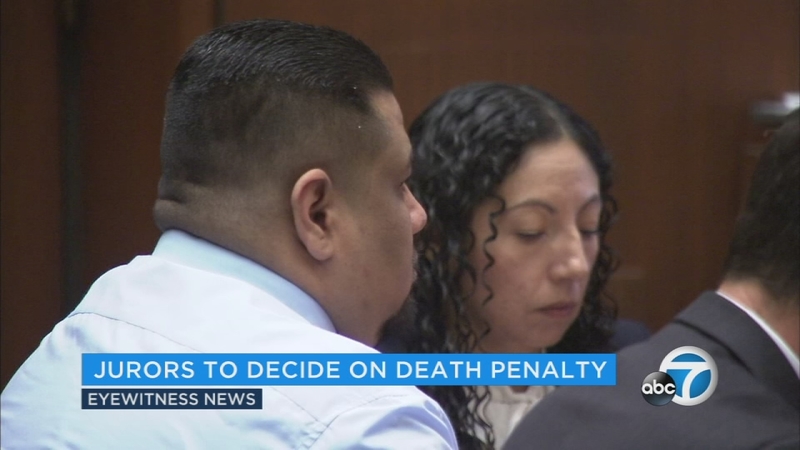 PALMDALE, Calif. -- Closing arguments concluded Monday morning and deliberations were beginning in the penalty phase of the trial for Isauro Aguirre, convicted of brutally beating his girlfriend's 8-year-old son to death.

A jury is being asked to recommend whether Aguirre, 37, should be sentenced to death or life in prison without parole. Prosecutors are seeking the death penalty for Aguirre.

Previous testimony convinced the seven-woman, five-man panel of jurors Gabriel Fernandez, of Palmdale, died in May of 2013 after months of torture and abuse. Jurors also found true the special circumstance allegation of murder involving the infliction of torture, making Aguirre eligible for capital punishment.

Among several family members, Gabriel's biological father, Arnold Contreras, served as one of the prosecution's witnesses. He said he felt guilty and hopeless and "should have been there" when he learned that his son had been beaten and was on life support.

Jurors were shown photos of Gabriel's tortured body lying on an autopsy table with injuries from head to toe and heard testimony from a Los Angeles County sheriff's detective that he had never seen a child with that many injuries in his 26-year career in law enforcement.

"Death penalty is justified for what the defendant did to Gabriel Fernandez," Hatami urged the jury. He then put a blown up picture of Gabriel in front of the jury and asked them to always remember what this case is about.

Hatami told the jury the case is not about the defendant, his family or a paid prison expert. He reminded the jury about all the weapons he brought in that were used on Gabriel.

"There's nothing worse in our society than a grown man murdering and torturing a little boy," Hatami said.

He added that Gabriel didn't get a trial, didn't get pretrial motions -- Aguirre was the jury and the judge.

Hatami continued speaking to the jury, saying that as if they were all in a nightmare, they all heard how Gabriel was handcuffed and put in a box with a sock in his mouth.

"He was cold, afraid," he said, recalling that Gabriel had to defecate and urinate in that box, was forced to eat cat litter, cat feces and eat his own vomit.

Gabriel's emaciated body had nine BBs in it, broken ribs, a fractured skull and a bruised and burned penis. He suffered unimaginable amount of pain in the hands of the defendant, the prosecutor added.

"The defendant stole Gabriel's innocence," Hatami said, as at least one juror cried and wiped tears away.

"He must have felt abandoned by everybody. The defendant isolated him," Hatami went on."That day that the defendant beat Gabriel to death, he was in the bedroom. He picked Gabriel and carried him like trash and discarded him in the living room. No man with good in him would do that."

The prosecution said death was merciful to Gabriel's pain and suffering: "When Gabriel needed (someone) the most, no one was there to hold him."

In return, the defense asked the jurors to give Aguirre life in prison without parole. They added that throughout his time in jail, Aguirre has not had a single rules violation, and with a life sentence, he will "never hurt anyone."

Throughout the penalty phase, defense testimony has tried to convince the court that Aguirre was a model citizen until he met Pearl Fernandez.

The defendant was relatively smart and sophisticated, the prosecutor said. He was involved in welfare fraud, was a security guard, worked in elderly care - "he could have just left," he added.

"The just punishment, the appropriate punishment? I don't need to tell you what it is because you already know," Hatami said in closing.

Gabriel's mother, Pearl Fernandez, is awaiting her own trial for murder.