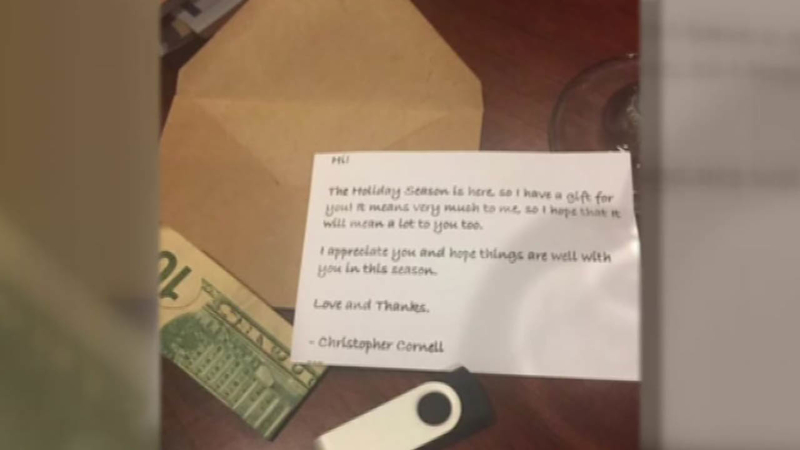 HARRIS COUNTY (KTRK) -- Unexpected envelopes on the front porches of homes in the Auburn Lakes neighborhood have unnerved dozens of homeowners.

In exclusive surveillance videos obtained by Eyewitness News, two different people can be seen walking up and down the north Harris County subdivision, dropping off envelopes at each house.

The gold colored envelopes say "For You" on the outside. Inside, there is a $10 bill, a note with a "happy holidays" type message and a flash drive.

"I opened the front door and there is one on my porch," said Heather Kouloumoundras, who lives in the neighborhood with her husband and four kids. "Well, I didn't touch it, I just left it there, because I was terrified."

Dozens of neighbors got the exact same envelope within the past 24 hours. Some thought it was just a Christmas gift.

"I thought it was just a blessing, free money. Ten bucks! Exactly," said Roel Tionco, who says he took the money out but has not yet looked through the flash drive.

Other homeowners who did open the flash drive uploaded screen captures of the files to neighborhood Facebook pages. They appear to show a variety of video files. Other residents called the Precinct 4 Constable's Office.

"I think it's very scary and I don't think it's a joke, I think we have to take it seriously," said Marry Ellen Reese, who plans to turn over her envelope to authorities.

Precinct 4 says its investigators have collected more than a dozen of these flash drives. They have also collected the cryptic note, which is signed "Christopher Cornell." Cornell is the name of a man currently in federal prison for trying to carry out an attack on Capitol Hill.

No one has been harmed, but the investigation has been turned over to the FBI.