Dozens of drivers lost control of their vehicles and slammed into each other during a snow squall.
WPVI 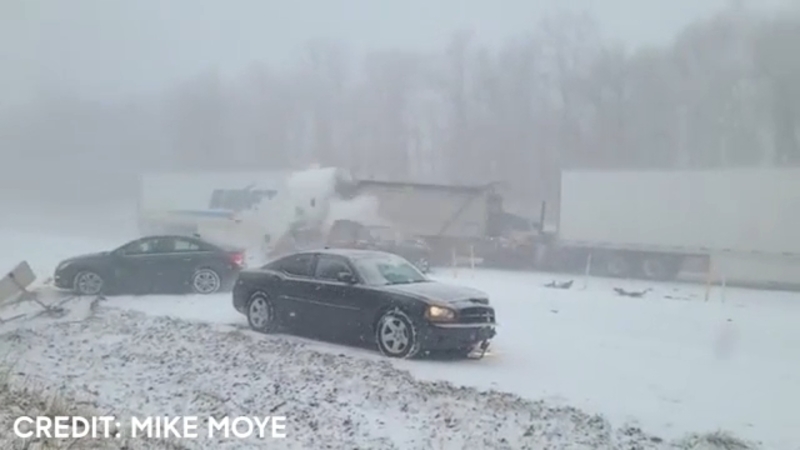 Massive pile-up on I-81 in Pennsylvania

A total of five people have now been pronounced dead, WFMZ-TV reports.

A collision involving multiple vehicles has closed a portion of Interstate 81 in central Pennsylvania.

Dozens of others were injured when tractor-trailers and other vehicles lost control and slammed into each other during a snow squall.

Some vehicles were mostly burned and others melted onto the highway, and authorities said they needed to go through each vehicle to make sure there are no human remains.

After the larger vehicles are removed and the road is cleared of debris, Pennsylvania Department of Transportation crews will need to remove a layer of the road surface due to spilled liquids such as fuel and oil from the crashed vehicles, PennDOT spokesperson Ronald Young said Tuesday afternoon. The roadway could be open by Wednesday morning.

The crash Monday on Interstate 81 was captured in videos posted on social media that showed drivers and passengers lining the snowy road and jumping out of the way as the cascade of crashes unfolded.

In one video, an out of control tractor-trailer smashed into a large dump truck turning it nearly 180 degrees, another large truck caught fire and spewed black smoke into the air, and an SUV struck a passenger car sending it spinning narrowly past a person standing on the shoulder in snow and fog.

The north and southbound lanes of the highway were closed for several hours after the accident, but the southbound side reopened around 6:30 p.m. Monday.