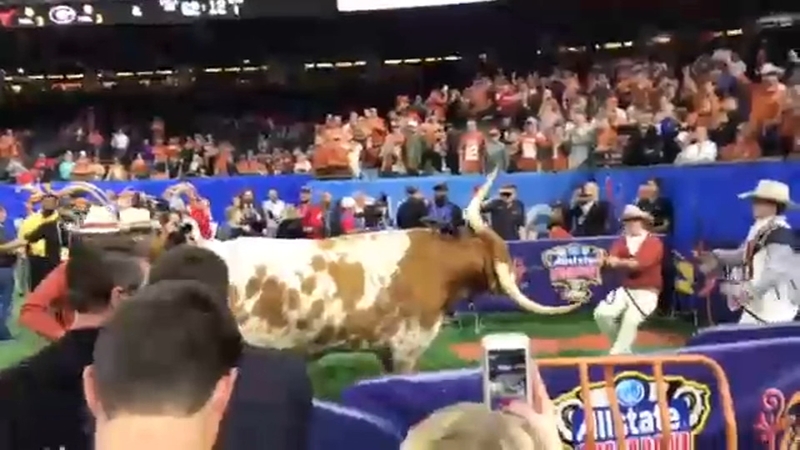 NEW ORLEANS, Louisiana -- A photographer is suing the owners and handlers of the Texas football program's mascot for "permanent" neck and back injuries he allegedly sustained at the 2019 Sugar Bowl when the longhorn steer knocked down its barricade and briefly charged in the direction of Georgia's bulldog mascot.

Nick Wagner, who was then a photographer for the Austin American-Statesman, filed a petition Friday in Travis County district court, the newspaper reported. He said the incident occurred on Jan. 1, 2019 while he was taking pictures of Uga X, Georgia's live mascot, before the Texas-Georgia game at the New Orleans Superdome.

Uga X, an English bulldog wearing a bright red Georgia sweater, was quickly pulled out of harm's way, but the head and horns of Bevo XV, the University of Texas' live mascot, appeared to make contact with several people, including two photographers, who scampered out of the way or were knocked down.

Wagner "was on one knee in front of the portable railing which Bevo was behind," the petition states. "Bevo XV rammed his longhorns twice into Plaintiff's back causing permanent injury to Plaintiff's neck and back."

Wagner, who left the newspaper in May, is seeking a jury trial with damages between $200,000 and $1 million.

John and Betty Baker, Bevo's owners, are named as defendants along with the Silver Spurs Alumni Association. The group is in charge of handling the 1,700-pound steer, the mascot for the University of Texas since the start of the 2016 season.

Wagner's attorney Jon Powell said he has more than $24,000 in medical bills from therapy sessions. Medical documents show that Wagner had "loss of motion" and "impairment" in two areas of his spine, according to the newspaper's review of the documents.

The Silver Spurs Alumni Association carries a liability policy with Cincinnati Insurance. But Wagner's claims for medical bills have been met with "radio silence," Powell said.

Edward Osuna, the San Antonio-based attorney of record for Cincinnati Insurance, did not immediately respond to a message left by the newspaper.