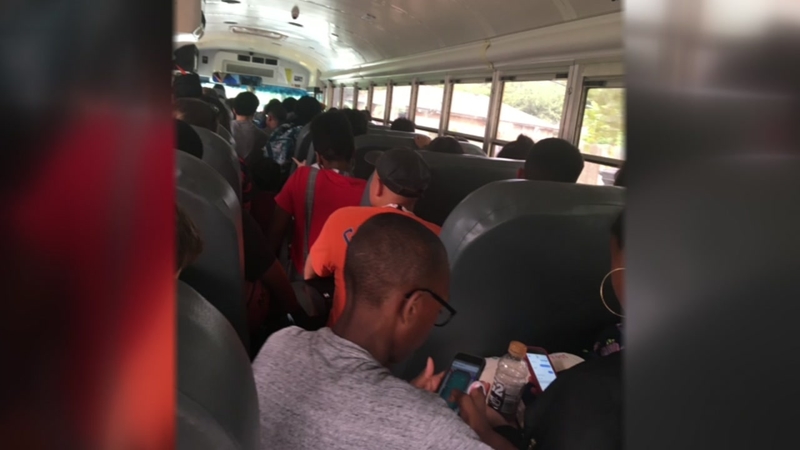 HOUSTON, Texas (KTRK) -- Many HISD parents are complaining to the district about overcrowding on school buses since the beginning of the school year.

"Basically the bus driver will tell the kids, 'If you have one cheek on the seat, you're ok,'" said parent Daryl Freedman.

Freedman's son has been forced to ride a crowded school bus to Energy Institute High School since August.

She says every time he has ridden the bus, students have to sit three to a seat.

"If there is an accident, the kids are not protected and it's just not safe," said Freedman. "Some of the kids have even been riding on the floor of the bus."

Jessica Cohen told Eyewitness News that her daughter was forced to squat in the aisle during a bus ride.

"More than two to a seat is not safe," said Cohen. "Those children would be projectiles."

After several emails and tweets to the district, Cohen says she filed a grievance this week.

"We transport our children like cattle. We herd them around. We pack them in like sardines," said Cohen. "It's shocking."

Federal regulation does not specify the number of people who can sit on a school bus seat. The school bus manufacturers determine the maximum seating capacity of a school bus.

The manufacturers use this number, which is based on sitting three small elementary school students per typical 39-inch school bus seat, in the calculations for determining the gross vehicle weight rating and the number of emergency exits.

NHTSA recommends that all passengers be seated entirely within the confines of the school bus seats while the bus is in motion.

Federal Motor Vehicle Safety Standard No. 222, "School Bus Passenger Seating and Crash Protection" requires that the interior of large buses provide occupant protection so that children are protected without the need to buckle-up.

Occupant crash protection is provided by a protective envelope consisting of strong, closely-spaced seats that have energy-absorbing seat backs.

Cohen and Freedman say that high school students should not be seated three to a seat.

"This is my child's life. It's a safety concern," said Cohen.

Eyewitness News reached out to HISD with several questions, and a spokesperson for the district replied, "As soon we were notified of overcrowding, our transportation team immediately began an investigation that included visiting the location and reviewing student route assignments. As a result of the investigation, an additional bus has been assigned to the route to assist with transporting students."
Report a correction or typo
Related topics:
educationbushisdschool bus
Copyright © 2022 KTRK-TV. All Rights Reserved.
TOP STORIES
Suspect who shot 3 officers now in custody after standoff, HPD says
ABC13 obtains HPD scanner traffic of chase that led to shootout
Man arrested in corporal's murder is 25-year fugitive, officials say
Bayou Bistro and Bar owner killed in Texas City shooting
Deputies escort body of fallen HCSO Sgt. to funeral home
Another cold front passes through tonight
100 bags of fentanyl found in bedroom of 13-year-old who died from ...
Show More
Biden confirms he will nominate first Black woman to SCOTUS
Toddler credited with saving family of 7 from devastating house fire
K9 stabbing suspect accused of killing father with dumbbell
Amy Schneider's 'Jeopardy!' accomplishments reach past podium
Armed driver was trying to rob another driver on Katy Fwy, police say
More TOP STORIES News