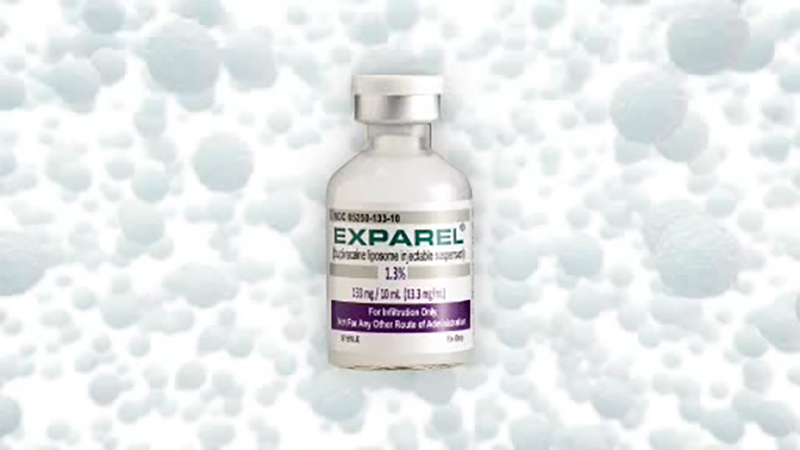 PARSIPPANY, New Jersey -- The nation's addiction to opioids is part of a crisis plaguing communities across America and particularly parts of New Jersey. According to the National Institute on Drug Abuse, opioid deaths have nearly tripled in the past 15 years.

But a possible antidote, created in New Jersey, could be part of the solution to the growing crisis.

"In the next couple of weeks, we will treat our three-millionth patient in the United States," Pacira Pharmaceuticals CEO Dave Stack said. "So there's very little doubt that we have had some modest impact on opioid epidemic."

It was five years ago when the drug Exparel hit the market, with the local, long-lasting anesthetic designed to reduce pain in those tough few days after surgery. But the real selling point is that unlike Percocet, Vicodin and Oxycodone, Exparel is not an opioid.

"It is very interesting to me that after being in this business for almost 40 years and never getting a patient testimonial or a letter of thank you from a patient, now at Pacira it's a matter of routine," Stack said.

Police warn teachers and students of candy laced with xanax

The drug maker says Exparel can reduce how long a patient is hospitalized and eliminates opoiod side effects like nausea and constipation. Also, it reduces the chance of yet another American potentially getting hooked on pain pills.

"It is half my patients for shoulder replacement taking only Tylenol afterwards," Dr. Sethi said. "Because this medication is going to cover them for the first 72 hours of their painful period."

Greenwich firefighter Lester Gilman is a patient of Dr. Sethi who had his second shoulder surgery a few months ago. He is using Exparel, which manages pain for three or four days, working almost like a slow drip inside the body.

"If this can work for other people and you can maybe cut down on some of the problems, addiction and everything else, I highly recommend it," he said.

New Jersey Governor Chris Christie has cracked down on prescription opioids in the state and sits on President Donald Trump's new task force to combat the addiction crisis. Exparel, too, is on the front lines of the battle.

"I think what is really good is that patients are now understanding of the depth of the problem and are taking control of the their own healthcare and are demanding opioid-free or reduced opioid at least post-surgical treatment strategies," Stack said. "And we're very active in helping them along those lines."