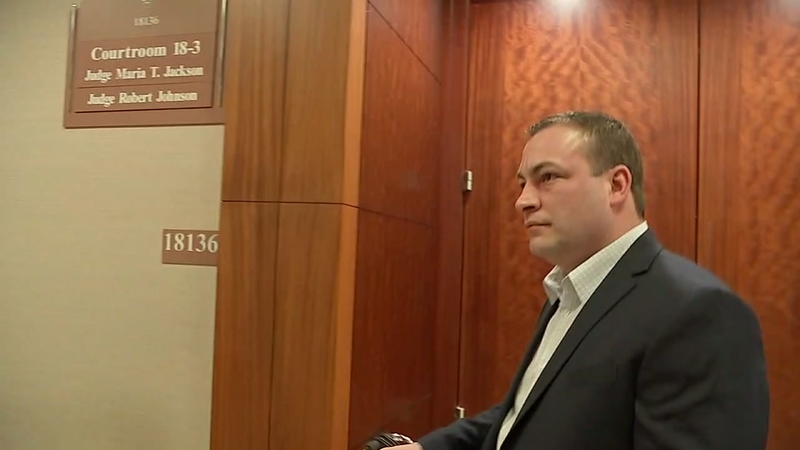 HOUSTON, Texas (KTRK) -- The jury heard opening statements and witness testimony in the trial of Blaine Boudreaux on Monday.

The 38-year-old is charged with causing four wrecks in one day, two of them fatal.

Boudreaux is accused of causing the four crashes in just two-and-a-half hours on April 26, 2015.

After opening statements, the prosecution focused on a timeline. Prosecutors showed surveillance video to the court, which showed Boudreaux leaving his apartment complex in his truck at 3:06 p.m. Then at 3:20 p.m., Boudreaux was allegedly involved in the first crash in the Texas Medical Center.

The officer who gave him a citation for the crash testified that Boudreaux said his son was in the hospital. The officer said Boudreaux admitted to causing the crash and said he was distracted. From there, prosecutors say he left and caused three more crashes.

In the third crash, Boudreaux is accused of hitting a veteran that was on the curb collecting scrap metal. Prosecutors say Boudreaux drove up on the curb, hit 61-year-old Leonard Batiste and then left the scene.

He's charged with murder, and both the defense and prosecution acknowledge that it's often unusual to face a murder charge in this type of case.

"The felony murder charge is complex. I've personally never seen one charged where there was an underlying offense with failure to stop and render aid, and so I think based on the timeline, and the issues, and this particular set of facts, that it's going to be a challenge," said Billy Skinner, Blaine Boudreaux's defense attorney.

"As the defense said and everyone has said, this is a very complex charge, this has never been charged in Texas. So we've never used an FSRA or failure to stop and render aid, to get to felony murder. I think it is critical to layout the timeline minute-by-minute," said Sean Teare, chief of the Harris County District Attorney's Vehicular Crime Division.

Boudreaux is charged with leaving the scene of that fatal crash and then causing another fatal crash, killing 6-year-old Joshua Medrano just eight minutes later.

The trial continues on Tuesday.

The prosecution is expected to call witnesses from the two fatal crashes.