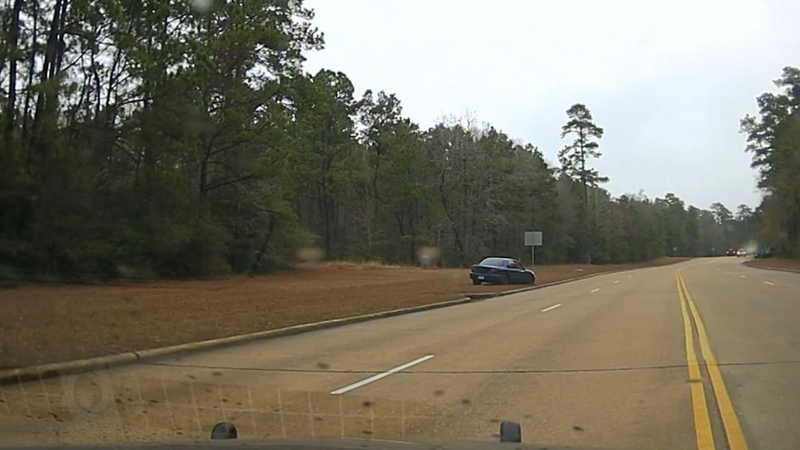 Dashcam video released of officer-involved shooting that killed a man

CONROE, Texas (KTRK) -- Conroe police released dashcam video of the violent incident that led to police shooting and killing a man who led them on a chase Sunday morning.

Police Chief Philip Depuis said a report of a suspicious car at a park led them to 33-year-old Gregory Kocian, who was behind the wheel. They say he also had a passenger with him. When officers tried to approach, Kocian sped off, leading them on a chase on I-45 before slowing down as if he was going to stop.

Once the officer caught up with the driver, reportedly, Kocian started firing at the officer.

The officer shot back, striking Kocian who later died at the hospital.

Dashcam video of chase and shootout, which left one suspect dead

Kocian is known in Montgomery County. A history of mugshots from the state database shows him aging through the criminal justice system. Last March, he was arrested after being accused of torturing a Conroe woman in her own home, even tying her up with extension cords. The 44-year-old told investigators she was choked, stabbed and sexually assaulted before being able to escape to a neighbor for help.

He spent 90 days in jail before the assault charges were dismissed at the end of May. He's now suing his accuser claiming defamation and the Montgomery County Sheriff's Office, claiming he was held in police custody without just cause. The lawsuit also claims, "as a result, plaintiff is left with a tarnished record and the inability to maintain a decent status in his community. He has lost his job, car and other things that make it difficult for his survival."

Conroe police say a chase suspect accused of opening fire on officers is in critical condition after he was shot by one of their officers.

Kocian's passenger from the chase has been questioned, it's not clear if he'll face charges. Police say they recovered two handguns from the car.