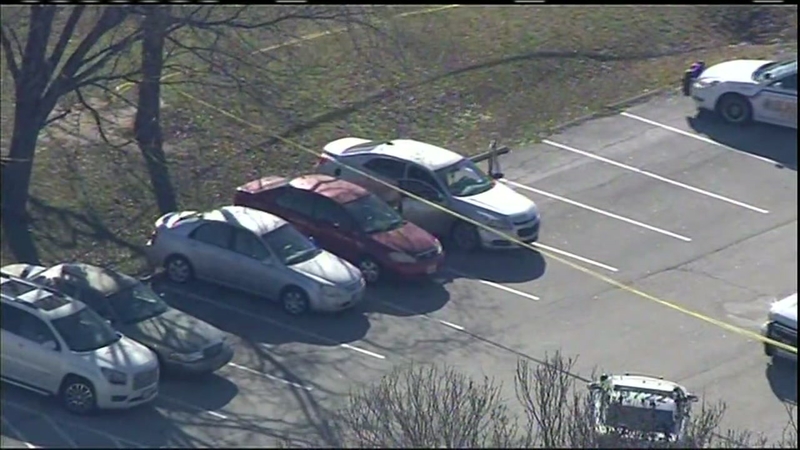 HOUSTON, Texas (KTRK) -- The suspect in a carjacking and stabbing was killed after allegedly threatening a deputy with a knife outside a northwest Harris County church.

While we don't know the suspect's name, we are just starting to unravel the final 48 hours of his life.

The 45-year-old Hispanic man died after he was shot by a deputy in the parking lot of St. Elizabeth Ann Seton Catholic Church, on Addicks Satsuma Road.

Earlier this afternoon, crime scene tape and a flurry of deputies could be seen from SkyEye13, a short distance away from two schools filled with students.

Investigators with the Harris County Sheriff's Office said the trouble began last night, when the suspect allegedly stabbed a man and left him for dead, fleeing the scene in his family's car.

"There was a car sitting in front of the house that I didn't recognize," said witness Kurt Herman.

Herman said he saw the suspect and another man arguing about money the night before he was shot by deputies.

"The gentleman hopped out on the side of the car and said he was stabbed," Herman said.

Sources tell Eyewitness News the 28-year-old victim was stabbed by the suspect, someone he trusted. '

Reporter Chauncy Glover reports from the scene of a deadly officer-involved shooting outside a Catholic church in northwest Harris Co.

Investigators said he then took off with the man's car, leaving him bloody in the middle of the street.

Deputies said the suspect stabbed the man multiple times. Kurt and his wife rendered aid, but he said the bleeding wouldn't stop.

"Please, help me," the victim screamed, according to Herman. "Don't let me die."

The stabbing victim was taken to the hospital in stable condition, and is expected to be okay.

Within hours of the violent stabbing, two repo men were able to track the alleged stolen vehicle to Beltway 8 and Tanner Road. When they arrived, they found the suspect unconscious inside.

The repo guys called 911 to get help for the man, but when EMS got there, deputies said the man came to and pulled out a knife.

Investigators said the suspect fled the scene in the car and came to St. Elizabeth Ann Seton Catholic Church, but deputies did not know why he chose to stop here.

A Harris County Sheriff's deputy and a state trooper found the man inside his car, and tried approaching the suspect. That is when investigators said the man pulled out his knife again, this time coming at the deputy.

The deputy opened fire, killing the man. He was not injured.

"All I heard was pop pop pop," a student said near the shooting scene.

Just down the street, Truiitt Middle School was placed on 'secure the building' mode after the shooting, preventing anyone from entering or exiting the campus.

The all-clear was given at 2:23 p.m., as sheriff's deputies continued their investigation at St. Elizabeth Ann Seton.

Eyewitness News reached out to St. Elizabeth Ann Seton Catholic Church and school, but have not been able to speak with officials there.

Deputies say they are investigating an officer-involved shooting near Truitt Middle School.

We are investigating an officer-involved shooting of a criminal suspect in the 6600 block of Addicks Satsuma Road in NW Harris County. No deputies appear to be hurt. PIO is en route. #hounews pic.twitter.com/MpNsRnnNJy