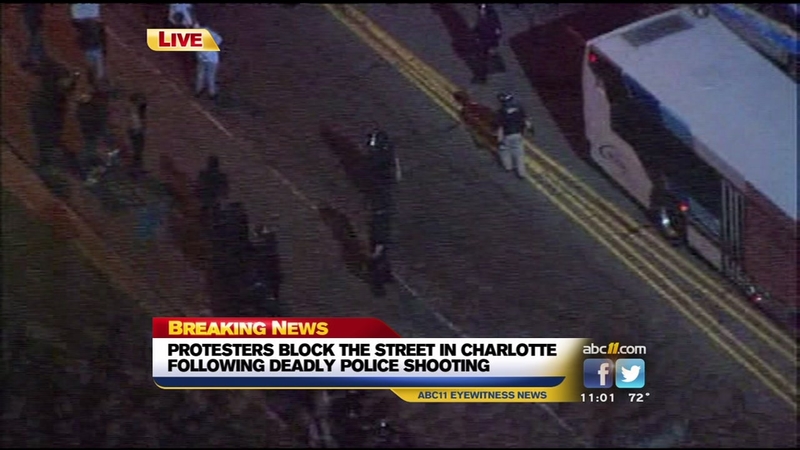 CHARLOTTE, N.C. -- Protesters gathered in Charlotte on Old Concord Road and police in riot gear are on the tense scene after police shot and killed a person carrying a gun Tuesday afternoon at a Charlotte apartment complex, officials said.

A Charlotte-Mecklenburg police offcer was injured in what CMPD said was an attempt to deescalate agitators during the demonstration. Riot police have deployed tear gas into the crowd.

Protesters are reportedly throwing objects, including water bottles at police officers. One protester was treated for minor injuries.

Hundreds of protesters blocked the streets.

The member of the Charlotte-Mecklenburg Police Department that was involved in the shooting has been identified as Officer Brentley Vinson. As is standard procedure with any officer involved shooting, Vinson has been placed on paid administrative leave. Vinson has been employed with the CMPD since July 21, 2014 and is currently assigned to the Metro Division.

The man fatally shot was identified as Keith Lamont Scott. His family has been notified of his death.

Both the officer and the dead man were identified by police as African-American.

Charlotte-Mecklenburg police officers were at the complex about 4 p.m. looking for a suspect with an outstanding warrant when they encountered the person - not the suspect they were looking for - inside a car, the department said in a statement.

The person exited the car with a gun, and then got back in, the statement said. When officers approached the car, the person got out of the car with the gun again.

At that point, officers considered the person a threat and fired their weapons. Police Chief Kerr Putney told reporters at the scene that at least one officer shot the person.

Road shut down after dozens show up in protest of shooting @wsoctv pic.twitter.com/BGejxv3nkD

Detectives recovered the firearm he had been holding.

The person was taken to Carolinas Medical Center and later pronounced dead.

People at the scene who said they were relatives of the dead man said Scott, a father of seven, was reading a book and did not have a gun. Police said they recovered a gun at the scene.

At least 100 protesters gathered to demonstrate the shooting Tuesday night. Police blocked access to the area, which is about a mile from the campus of the University of North Carolina at Charlotte.