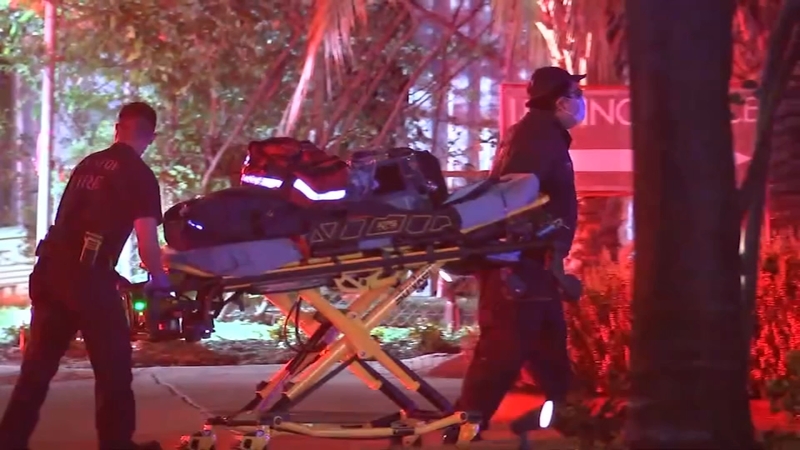 HOUSTON, Texas (KTRK) -- The wife and 4-year-old stepdaughter of an off-duty Harris County deputy constable were wounded early Sunday in a home invasion at their Montrose apartment.

It happened some time after 2 a.m. in the 2200 block of West Dallas near Montrose Boulevard.

The deputy and his family were asleep in their apartment when someone broke in, according to Houston police. The off-duty deputy woke up and confronted the suspect and they exchanged gunfire before he fled the apartment.

The deputy constable told investigators that he believes he hit the suspect during the shootout, and a blood trail leading away from the apartment was discovered, according to Houston police chief Troy Finner.

The 4-year-old was in surgery at a hospital Sunday morning and was stable.

Authorities fanned out in the area as they looked for the man responsible. It wasn't until Sunday afternoon that police got a call about the suspect's whereabouts.

Officers located the suspect in the 500 block of West Greens Road near Antoine Drive around 5:40 p.m.

SWAT officers were in the middle of serving the suspect a warrant when the incident occurred. Finner said the suspect fired on officers and drove off but only made it two blocks down before firing on officers again.

The suspect then crashed into a tree and fired on the officers a third time. Officers then fired back and struck the suspect multiple times. He was rushed to the hospital in critical condition.

Police described the suspect as a 27-year-old Hispanic male. Finner said his family was cooperating with police all day and also noted the suspect has a history of mental illness.

The suspect is the man wanted for breaking into the home of a Harris County deputy constable, according to HPD. The man was rushed to the hospital to undergo surgery.

Investigators weren't yet sure if the deputy constable was targeted or if the intrusion was a random act.

The deputy constable works for Harris County Precinct 1 and has been with the agency for around three years.

Moments after the man broke into the deputy constable's home and exchanged gunfire, police converged on the area to find him. Listen to part of their efforts from Sunday morning.